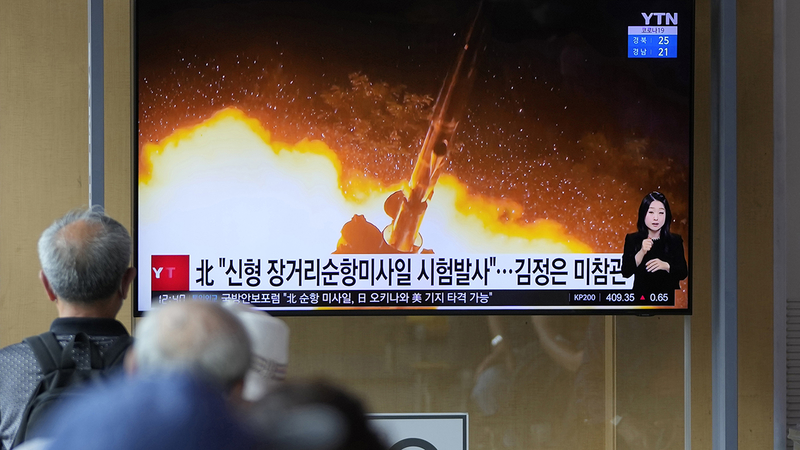 The missile was fired from the Sunan area of North Korea at around 7.52 a.m. local time, the Joint Chiefs said.

Japanese Defense Minister Nobuo Kishi said North Korea launched "at least one ballistic missile," that flew a distance of 186 miles and to a maximum altitude of 373 miles, CNN reported.

RELATED: Are sanctions hurting Russia? How the West is escalating financial penalties over Ukraine invasion

South Korea's National Security Council (NSC) said the launch was "undesirable" for peace stabilization while the world is trying to resolve the Ukraine war, according to the Blue House, South Korean presidential office.

NSC also expressed "deep concern and severe regret" over the launch, which marks the eighth missile test this year, and urged the North to "immediately stop actions contrary to peaceful resolution through diplomacy."

The newest launch comes less than two weeks ahead of the South Korea presidential election on March 9, in which North Korea is likely to be a key electoral issue. If conservative candidate Yoon Suk Yeol is successful, analysts expect him to take a much harder line against the North compared to current President Moon Jae-in.

North Korea has ramped up its missile testing in 2022, announcing plans to bolster its defenses against the United States and evaluate "restarting all temporally suspended activities," according to state media.
In the first four weeks of 2022 alone, North Korea launched seven missile tests, but none of those were of its longest range missiles.

During the Trump presidency, North Korean leader Kim Jong Un tested intercontinental ballistic missiles (ICBM) that could theoretically reach continental US, leveraging those tests into meetings with the then-U.S. president. Last year, during U.S. President Joe Biden's first in office, North Korea staged eight tests -- none in the range of an ICBM.

Analysts suggest the increased testing this year shows Kim is both striving to meet domestic goals and show an increasingly turbulent world in which Pyongyang remains a player in the struggle for power and influence.

"North Korea is not going to do anyone the favor of staying quiet while the world deals with Russia's aggression against Ukraine," Leif-Eric Easley, associate professor of international studies at Ewha University in Seoul, said following Sunday's test.

"Pyongyang has an ambitious schedule of military modernization. The Kim regime's strength and legitimacy have become tied to testing ever better missiles."