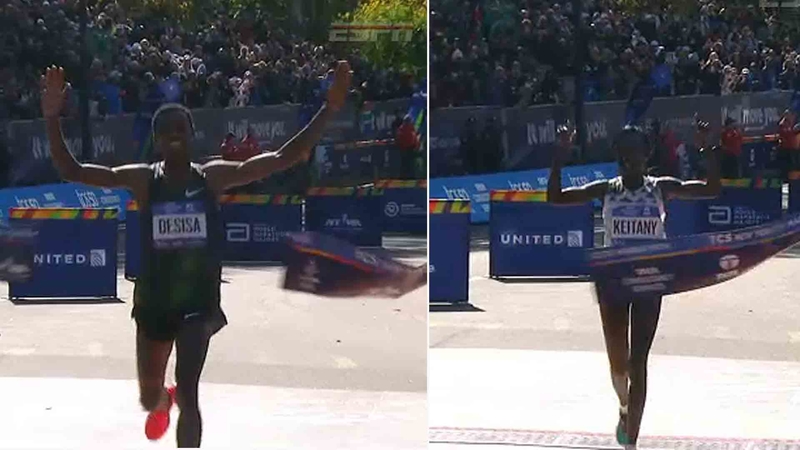 This is the first New York City win for Desisa. His winning time was 2:05:59.

Keitany, with a time of 2:22:48, became the second female ever to win four New York City Marathons.

"I can say the course record was not in my mind," Keitany said. "For me, winning was very important."

He is the youngest competitor ever to win a New York City Marathon, with a time of 1:36:21.

Defending champion Manuela Schar of Switzerland won the women's Wheelchair Division with a time of 1:50:27.

Watch the professional female participants at the start of the 2018 TCS NYC Marathon.

The marathon kicked off Sunday morning under clear skies, with more than 50,000 participants taking part.

All four winners of last year's race were back working to defend their titles.

American Shalane Flanagan and Kenyan Geoffrey Kamworor were hoping to repeat, along with Schar and Marcel Hug - both from Switzerland - in the wheelchair division.

"To be coming back as the defending champion, it's quite an honor and literally a dream come true," said Flanagan, the first U.S. woman to win the NYC Marathon since Miki Gorman in 1977.

This year's race featured a dominant set of runners from the United States in the women's field, including Flanagan, 2018 Boston Marathon winner Desiree Linden and Molly Huddle.

The wheelchair division also featured legends such as Tatyana McFadden.

CeFaan Kim has more from the finish line in Central Park.

Route: Map and other info

Want to run a marathon? Top running tips to start from the pros!

Run with Champions: Kids run alongside the world's best ahead of TCS NYC Marathon