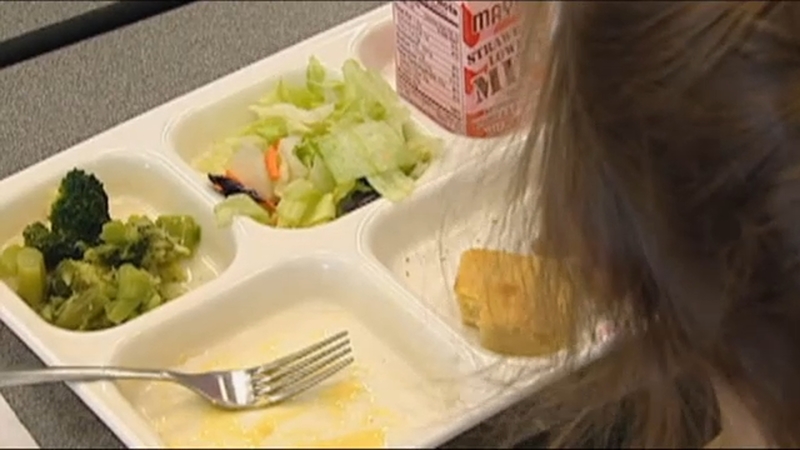 NEW YORK (WABC) -- Thousands of New York City public school students are being forced to eat lunch hours before traditional lunchtime -- and the early meal has many wondering if they are sitting down for breakfast or lunch.

Mayor Bill de Blasio and NYC Schools Chancellor Richard Carranza said Monday at PS 130 in Brooklyn they are trying to address the problem.

According to the Department of Education's numbers, more than 900 schools start lunch service at 11 a.m. and some schools are serving lunch as early as 8:50 a.m.

De Blasio acknowledged it's a problem and pointed to a shortage of space, often exacerbated by co-location of more than one school within a single building.

"We all understand some schools are dealing with real challenges in terms of the number of kids in the school and the amount of space in the cafeteria, some real logistical challenges, and I don't want to diminish that, but this is not the way it's supposed to be," de Blasio said. "So we have to come up with changes that will allow kids to eat lunch when it's lunchtime."

Carranza agreed, saying lunch should be lunch -- it should not be somewhere between breakfast and lunch.

"We by no means want to have the same number of schools starting early lunch next year as we have this year," Carranza said.

The mayor says the city has been working on the issue, but it is not going to be easy.

"We put an unprecedented amount of money into building new and rehabbing -- and when you rehab, trying to fit some of the things that were missing," de Blasio said.

De Blasio also announced that the city is expanding its "Meatless Mondays" programs to schools across the five boroughs.

"Cutting back on meat a little will improve New Yorkers' health and reduce greenhouse gas emissions," said Mayor Bill de Blasio. "We're expanding Meatless Mondays to all public schools to keep our lunch and planet green for generations to come."

The city began a "Meatless Mondays" pilot program at 15 schools in Brooklyn in 2018.

Now other schools will provide all-vegetarian breakfast and lunches each Monday, beginning in the 2019-2020 school year.

"Meatless Mondays are good for our students, communities, and the environment," Carranza said. "Our 1.1 million students are taking the next step towards healthier, more sustainable lives. Our students and educators are truly leaders in this movement, and I salute them!"

The expansion will be cost-neutral, and the Department of Education's Office of Food and Nutrition Services will meet with students to get feedback before the menu for next fall is finalized.