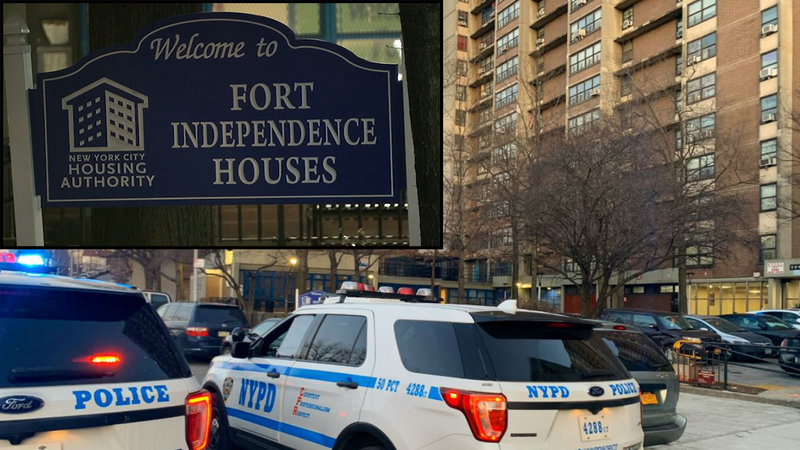 KINGSBRIDGE, Bronx (WABC) -- The search continues Tuesday for a NYCHA employee accused of shooting the building superintendent in the Bronx Monday afternoon.

Authorities say a dispute between the two led to the gunfire, with the victim shot in the leg, chest and abdomen. He is expected to survive.

The incident was reported just after 2 p.m. at the Fort Independence Houses in the 3300 block of Bailey Avenue.

Authorities say the 43-year-old superintendent was shot three times by the 46-year-old employee after a dispute on the third floor.

Barbara Lauray, the president of the Tenants Association at the Fort Independence Houses, said it was an open secret that the mid-level NYCHA supervisor had been a major problem, so much so that she said she was not surprised he pulled a gun on the development's superintendent.

"There was feuding back and forth, this individual was written up on numerous occasions," Lauray said. "So it wasn't like NYCHA didn't know about the situation. This guy they had here was a Roman candle. They knew his fuse was gonna blow."

Officials say the building super was writing the suspect up for a policy infraction when he pulled the gun and opened fire.

The suspect left the scene in a beige Chevrolet Tahoe.

"He had altercations with co-workers, couldn't get along with anybody," Lauray said. "He was mean, nasty, rude."

Lauray said she had personally complained about the suspect to NYCHA officials, who said they would talk to him. She says that was a year ago.

"The superiors at NYCHA knew what was going on here, and to allow it to go on for a long period of time and do nothing about it?" she said. "And now we have a gentleman in the hospital with bullet wounds because you allowed a nut to work in a development and you knew he was out of control."

The suspect also apparently slashed tires on the cars of other employees before he fled the scene.

NOW: @NYPD50Pct searching for @NYCHA employee who shot his supervisor at Fort Independence Houses in Kingsbridge section of the #Bronx. Victim expected to survive. #abc7ny pic.twitter.com/YfEvJCmsoL