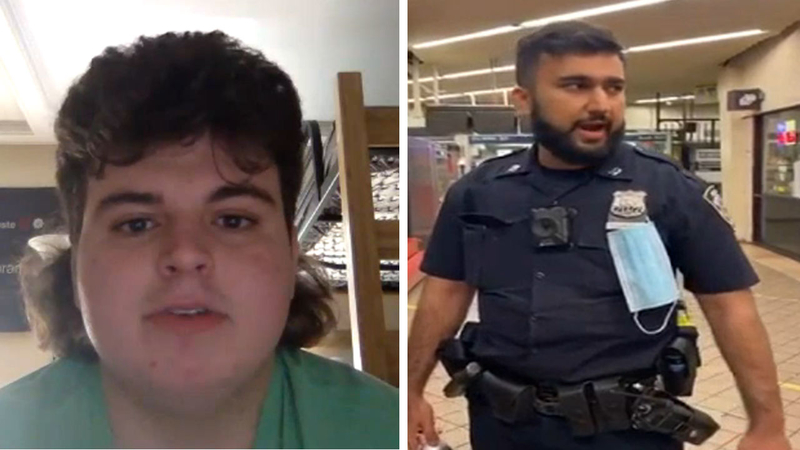 NYPD officers have controversial response when asked to wear masks

BROOKLYN HEIGHTS, Brooklyn (WABC) -- A freshman at NYU called out two NYPD officers not wearing masks at a subway station in Brooklyn and now their not-so-friendly response is drawing some scrutiny.

The 50-second interaction happened Tuesday night just before 9 p.m. at the Clark Street station in Brooklyn Heights -- and it was recorded on video.

NYU freshman Mihai Ciocan said the unmasked officers immediately stood out because just 36 hours earlier, the MTA started enforcing a $50 fine for those not wearing a mask in transit stations, subways and buses.

"I'm like 99% sure I wouldn't have taken it if there wasn't the fine for the subway," Ciocan said. "So I just asked if the fine applied to them."

When asked if he questioned the officers out of curiosity or sarcasm, Ciocan said it was a mix of "80% being curious and 20% being pissed off."

When he first confronted the officers, the video posted to TikTok showed their response was the mask rule only applied if they couldn't maintain six feet of distance -- which isn't exactly true.

RELATED | Mask up or pay up: MTA now enforcing $50 fine on bus, subway

"If you want to step within six feet of me, I'll gladly put on a mask. So would you like to do that?" one officer said.

His partner also had a strong reaction to the question.

Gov. Andrew Cuomo addressed the incident during a news conference on Thursday:.

"Protesters and police, the law applies to you, the law still applies and police department your job is to enforce the law why don't you follow the law? It is a very bad signal when you see police people who are not wearing a mask how can you enforce it if you don't follow it? And also to local electives, it is your responsibility to make sure your police department follows the law. To the local governments, you are responsible for monitoring the compliance with the reopening plan."

The MTA has also made their policy clear and released a statement to Eyewitness News:

"Everyone in the transit system is required to wear a mask - it's the law - no exceptions. This is a matter of respect for fellow New Yorkers, including our customers and employees, and for public health and safety."

The NYPD also released a statement in response to the video:

"It's important officers are reinforcing the best health practices and wearing a mask for their own safety. Officers will continue to set the right example for the public and ensure safe transportation for riders. In addition, we are doing spot checks of our officers throughout the system."

Ciocan didn't think the two officers set the best example and has since filed a formal complaint.

The 28-year-old victim was struck in the head and body before she was sprayed in the face with an unknown substance -- all because she asked one of the suspects to wear a mask.