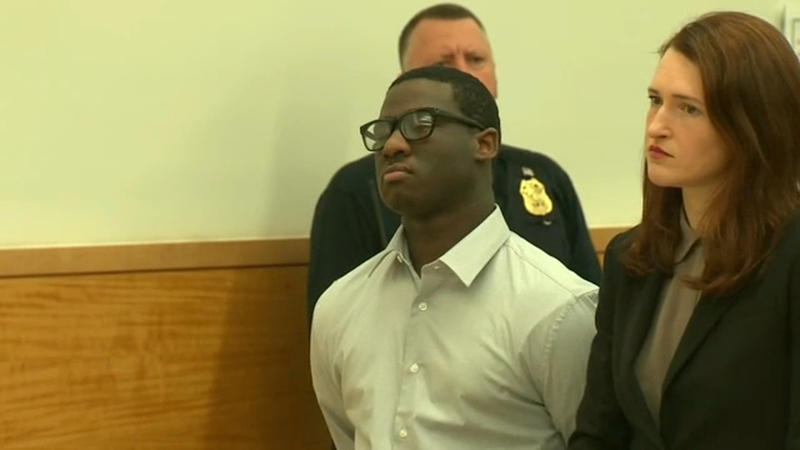 NEW YORK (WABC) -- A Brooklyn teenager who was convicted of assault for dragging an NYPD officer in a stolen vehicle was sentenced to 16 months to 4 years in prison Wednesday.

Seventeen-year-old Justin Murrell faced a maximum of 3 1/2 to 10 years behind bars in the dragging of Dalsh Veve, who was seriously injured in the incident. But despite a request for a max sentence from the Brooklyn District Attorney's Office, Judge Ruth Shillingford decided on the shorter sentence.

Murrell, who was sentenced as a juvenile offender because he was 15 at the time, was previously acquitted of attempted murder.

Brooklyn District Attorney Eric Gonzalez called it "regrettable" that the judge did not impose the maximum sentencing, noting Murrell "was given numerous opportunities to get on the right path."

"Officer Veve's heroism exemplifies the most courageous duty demanded of our men and women in uniform, the willingness to put one's self in harm's way to protect the lives of others," said Oren Yaniv, a spokesman for the District Attorney's Office. "He suffered life-changing injuries due to this defendant's actions. This defendant had numerous contacts with the criminal justice system and was given numerous opportunities to get on the right path. Yet he has repeatedly proven that he has no regard for the rule of law and is a danger to society. The judge should have therefore imposed the maximum sentence and it is regrettable that she failed to do so. The rule of law, the safety of our police officers and the circumstances of this case demanded a more appropriate penalty."

The condemnation of the lenient sentence was quick and rampant from law enforcement. Patrolmen's Benevolent Association President Pat Lynch was livid.

"I have never been so angry in my entire life," he said. "I've never sat in a courtroom where a judge sat and looked at a police officer confined to a wheelchair, heard the widow speak of how their lives have changed, talked about a 4-year-old that will not feel the hug of her father, and then say this mutt should be treated as a child. His decisions were adult decisions. The results changed lives. I warn the people of this city, in four years, this potential cop killer will be back on the street."

"I share Pat Lynch's anger," he wrote. "What I witnessed in court today is a clear example of how a defective law interferes with justice and how the court simply disregarded the risk and danger that cops face protecting the public. The no bail-no jail policy of our political leaders in this state should anger all cops and hard working law abiding citizens of New York."

"A mere 16 months-to-4 years in prison for the criminal who caused catastrophic and lasting injuries to #NYPD Detective Dalsh Veve is an absolute disgrace," he wrote. "Our brave & selfless public servant, his family, and all #NYC cops deserve far better. Justice fell short today."

"Detective Dalsh Veve served the people of New York City bravely and selflessly, and in that service sustained injuries that he will carry with him for the rest of his life. The short period of time this young criminal faces pales in comparison to the sacrifice made by Dalsh and his wife and young daughter, who saw their lives changed forever by this outrageous crime. Justice fell short today, and Dalsh, his family, and police officers across the city deserve far better."

Murrell was behind the wheel of a stolen car when he was stopped by Veve in East Flatbush in June of 2017, but Murrell kept going, dragging the officer several blocks.

Veve hit his head, suffered severe brain damage and requires 24-hour care. He was first in a coma, then rehab for almost a year.

He still cannot speak in complete sentences or walk on his own.

He and his wife were in the courtroom, but neither commented. They left the courthouse to applause from fellow officers.