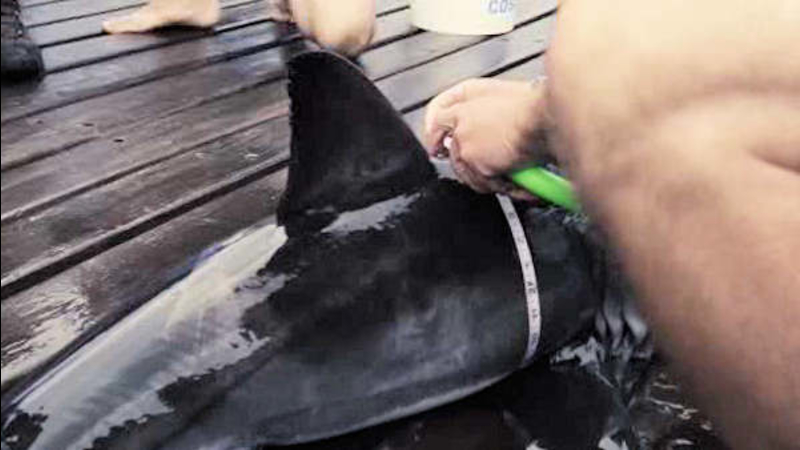 MONTAUK, New York (WABC) -- You might remember Mary Lee, the 3,500-pound great white shark caught off the Jersey shore in 2012 by OCEARCH. And she returned last May, raising suspicion that female great whites return to our waters to give birth.

In a quest to answer that question, OCEARCH looked for a nursery of baby great whites in the waters off Long Island.

They were hoping to catch maybe one, but the expectations, anticipation and suspense came to an end as OCEARCH pulled shark after shark out of the ocean right off of Montauk.

The three-week expedition along the New York Bite proved that great white sharks are giving birth to their young there, and a total of nine shark pups were tagged in four days.

"We have just been totally overwhelmed by the abundance here and the volume of sharks we're seeing," OCEARCH's Chris Fischer said.

A four-foot, 50-pound female now known as Montauk was caught, and scientists quickly analyzed her.

"While I'm getting blood, the acoustic tag is being put in place, and someone else is collecting parasites on the animal," said Harley Newton, of the New York Aquarium. "Someone else is also measuring the animal."

They can tag the shark, attach a sensor to the fin and surgically implant the tracker in less than 15 minutes, which allows them to potentially get data from the shark for 10 years.

Nearby, the first ever male caught by OCEARCH measured at five feet and 67 pounds. The shark, named Hudson, is a healthy great white just off the shores of New York.

"These whites sharks, they pick good places to drop off their pups," Fischer said. "It means you are living in a very special place, critical habitat for the entire abundance of the north Atlantic."

OCEARCH has done 26 expeditions -- more than Jacques Cousteau -- all aimed at saving the ocean.

"It means we are doing something right here in New York waters," said Hans Walters, of the New York Seascape Program.

The Wildlife Conservation Society and the Long Island Shark Collaborative were on board with OCEARCH, and both plan to do even more tagging.

"With OCEARCH's ability to put us on fish and teach me what they're doing, and allow me to continue it, is super exciting," the Shark Collaborative's Greg Metzger said.

The GPS sensors are active, and anyone can follow the sharks and get the data on the OCEARCH app.