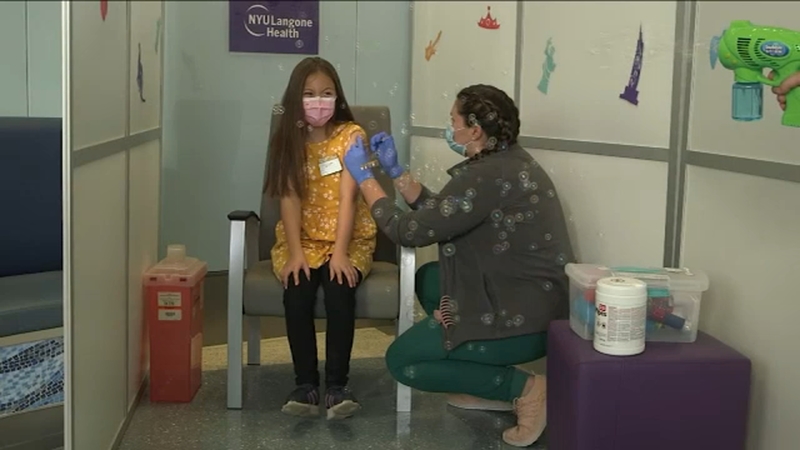 FDA waiting on 3rd shot data for kids under 5

NEW YORK (WABC) -- We're learning more about the FDA's decision to further delay the COVID-19 vaccine that Pfizer is testing for children under age 5.

This youngest group is the only age group not yet eligible for vaccination, and the FDA says it needs to wait for data on how well a third shot works.

That's after first urging Pfizer to move forward with applying for emergency use before knowing if children will need two or three shots.

Experts say this will allow pediatricians and patients to make fully informed decisions.

The original plan would have allowed vaccinations to begin within weeks.

Over 1,400 unvaccinated NYC employees terminated Friday
Approximately 1,430 unvaccinated New York City employees were terminated Friday, as the city instituted its first round of eliminations of municipal workers who defied the vaccine mandate. Virtually all of the employees dismissed Friday had been on unpaid leave for more than three months, a city official said, so residents should not see a disruption in city services. The city was pleasantly surprised to learn that another 939 employees who were unpaid leave decided to vaccinated and keep their jobs- nearly 40% of those who were on leave without pay.

Free at-home COVID tests now available at NYC cultural sites, libraries
New York City is beefing up its push to get more people tested for and vaccinated against COVID-19, as well as working to help small businesses get a boost in their receipts. The city is handing out free at-home testing kits across the five boroughs, which can be picked at landmark cultural sites like the American Museum of Natural History. In fact, there are 14 landmark city cultural sites and 27 branches of the New York Public Library, Queens Public Library and Brooklyn Public Library where weekly walk-up distributions began Monday.

Off-Broadway Week returns after hiatus with 2-for-1 tickets to 17 shows
Off-Broadway Week has returned after a one-year hiatus due to the pandemic. Theater fans can pick up 2-for-1 tickets to 17 shows, including Blue Man Group, Jersey Boys, STOMP, Beauty and the Beast and The Play That Goes Wrong. The Off-Broadway League requires proof of vaccination for all audience members, as well as performers, crew and theater staff. Audience members are required to wear masks except when eating or drinking in designated areas.

"We are pleased to kick-off NYC Off-Broadway Week today, as our Valentine's Day gift to the greatest city in the world. Each year, NYC Off-Broadway Week has given New Yorkers and visitors the opportunity to experience the intimacy and artistry of these incredible productions, and celebrate the theater communities found throughout the city," said Fred Dixon, President and CEO of NYC & Company.

Connecticut senate expected to extend Gov. Lamont's remaining COVID orders
The Connecticut Senate was expected Monday to temporarily extend some of Gov. Ned Lamont's remaining pandemic-related executive orders, including a statewide mask mandate for schools and child care centers the Democrat has said he wants lifted Feb. 28. The planned vote in the Democratic-controlled Senate follows last week's 86-62 vote in the Democratic-controlled House of Representatives. Senate President Pro Tempore Martin Looney, D-New Haven, who has said his personal preference would be to continue a statewide mask mandate, told reporters he will support Lamont's plan, which he called a compromise.

Key US-Canada bridge reopens as Ottawa protest persists
The busiest U.S.-Canada border crossing was open Monday after protesters demonstrating against COVID-19 measures blocked it for nearly a week, but a larger protest in the capital, Ottawa, persisted as city residents seethed over authorities' inability to reclaim the streets. Demonstrations against virus restrictions and other issues have bottled up several crossings along the U.S.-Canada border and hurt the economies of both nations. They also inspired similar convoys in France, New Zealand and the Netherlands. U.S. authorities have said that truck convoys may be in the works in the United States.

Police in Windsor, Ontario, arrested 25 to 30 protesters and towed several vehicles Sunday near the Ambassador Bridge, which links Windsor - and numerous Canadian auto plants - with Detroit. The bridge, which carries 25% of all trade between the two countries, reopened to traffic late Sunday night. After protesters began blocking bridge access Feb. 7, automakers began shutting down or reducing production at a time when the industry is already struggling with pandemic-induced shortages of computer chips and other supply-chain disruptions.