More police refusing to name shooters for fear of copycats 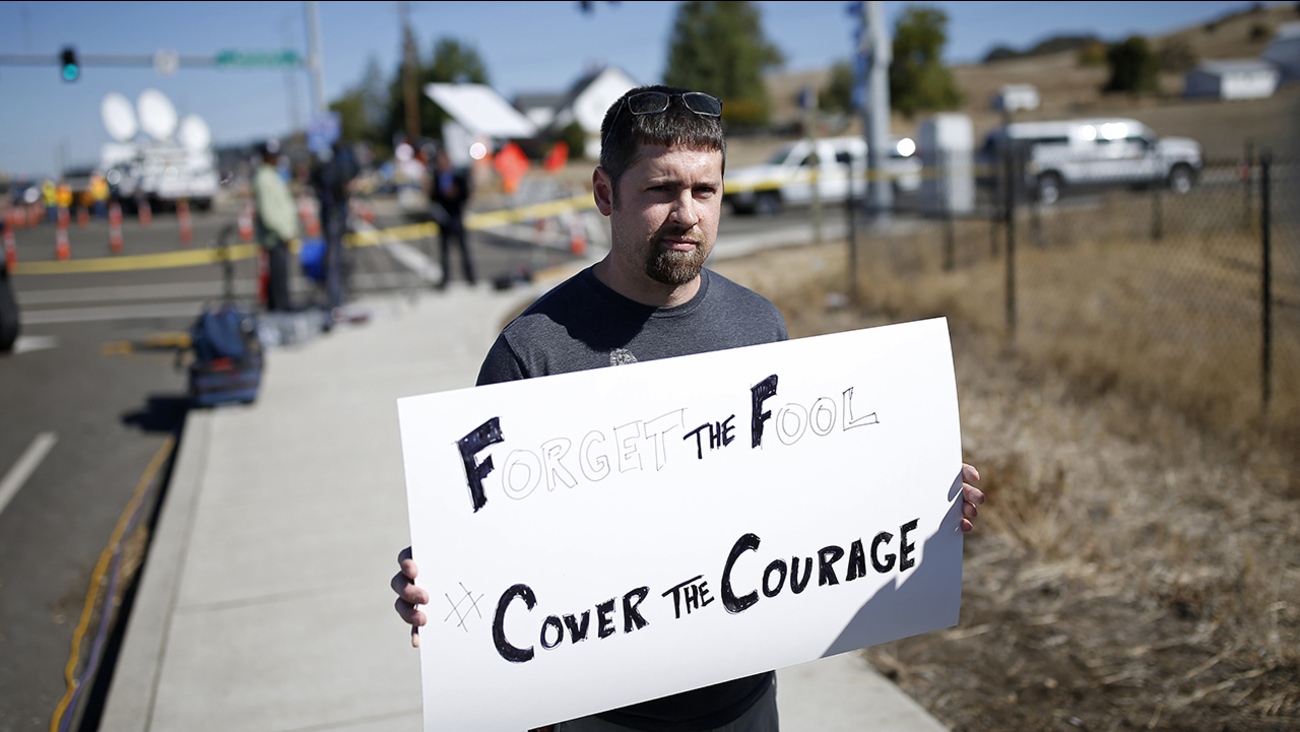 Mike Scott holds up a sign near the road that leads to Umpqua Community College Friday, Oct. 2, 2015, in Roseburg, Ore. (John Locher)

The sheriff detailed how a shooter armed with several guns walked into a morning writing class Thursday at a rural Oregon community college and killed nine people. He described how investigators found still more weapons at the man's home.

But when it came time to reveal the shooter's name, Sheriff John Hanlin adamantly refused, saying, "I will not give him the credit he probably sought prior to this horrific and cowardly act."

Like Hanlin, law enforcement officials are recently refusing to name mass shooters, hoping that not immediately identifying them will reduce the chance of their notoriety and keep their actions from inspiring others.

There's little research to suggest the practice prevents copycats. And criminologists and ethicists worry that withholding names will make it harder to assess a mass killer's motivations and spot trends that could help prevent future violence.

Knowing the names "and their histories, lets us better understand the larger social patterns, policies and tensions leading up to their crimes," said Vanderbilt University professor Jonathan Metzl, who called the effort understandable but misguided.

Families of mass shooting victims have long urged journalists to avoid using the gunmen's names and photos in public, saying the sight of them renews their pain and turns troubled murderers into celebrities.

Last year, a police chief in Washington state would not identify a 15-year-old boy who killed himself and four friends at a high school, saying, "I will not promote the motivation by spending any time on the shooter."

A sheriff in suburban Denver refused to speak the name of a high school senior who killed himself and a classmate in December 2013, saying "he deserves no recognition."

And throughout the four-month trial of Colorado theater shooter James Holmes, prosecutors repeatedly referred to him as "that guy," pointing to Holmes seated at the defense table, over angry objections from his attorneys.

The grandmother of a female student who survived the rampage at Umpqua Community College in Roseburg, Oregon, said the shooter gave another student a package to deliver to authorities. However, it is unclear whether Christopher Sean Harper-Mercer sought notoriety.

Media organizations routinely name mass shooters, reasoning that the name is the key detail that helps unravel and answer broader questions about the killer's motivations and hold government accountable.

Only with a name can the public know, for example, whether a killer shouldn't have been able to buy a gun or if authorities missed red flags.

The Associated Press includes the names of the perpetrators or suspects involved, except in situations involving minors, AP Standards Editor Thomas Kent said. "The names are a matter of public record, and reporting names eliminates the possibility of rumors spreading about who the person involved may or may not be," he said.

Towers acknowledged that it's impossible to say whether publicizing gunmen's identities caused more violence, as their names were part of every news story. Police and news agencies would have to agree not to publish the names of shooters for a period of time in order to accurately study the impact, she said.

Researchers say the reasons for concern are obvious.

Harper-Mercer's social media profiles suggested he tracked other mass shootings. In one post, he appeared to urge readers to watch the online footage of a man shooting two former colleagues live on TV in Virginia, noting "the more people you kill, the more you're in the limelight."

Adam Lanza, who killed 26 students and staff at Sandy Hook Elementary School in December 2012, was obsessed with the 1999 bloodbath at Columbine High in Colorado and other mass killings, keeping a spreadsheet that ranked them.

Shooters inspire each other, so police are right not to put a spotlight on them, said Pete Blair of Texas State University's Advanced Law Enforcement Rapid Response Training Center.

Blair led an effort called "Don't Name Them" that was endorsed by the FBI. Later this month, Blair will tell police at the International Association of Chiefs of Police conference to focus less on the gunman and more on victims after high-profile crimes, whose names are often forgotten.

Some researchers say a name alone is not enough to motivate a mass killer.

Getting attention might be part of the goal, but most mass killers are driven by a number of other factors, including mental illness, anger, revenge and fear, said Grant Duwe, a Minnesota corrections official who wrote the book "Mass Murder in the United States: A History."

His study of mass shootings throughout history was aided by news reports that named the perpetrators.

So "if the media had a policy of refusing to name who was responsible for carrying out a mass killing, it might have made my (research) a lot harder, to try to identify all the information associated with a case," he said.