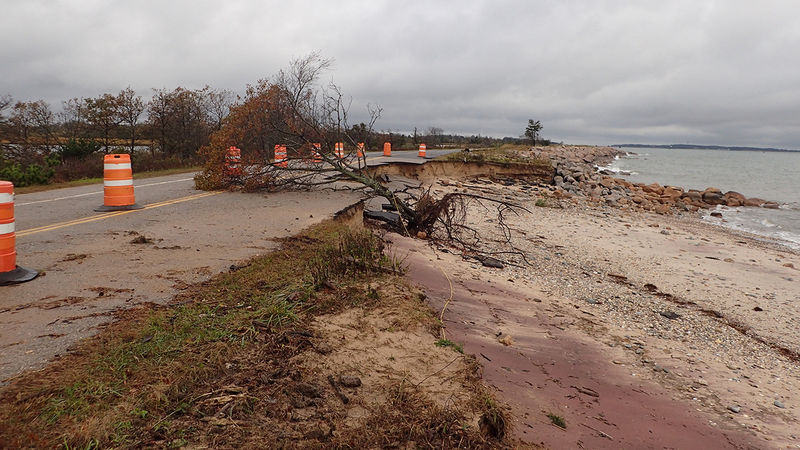 SOUTHOLD, Long Island (WABC) -- Long Island continues to clean up from wild weather over the weekend and into Monday, with a confirmed tornado on Fishers Island and a road collapse the prompted the closure of Orient Beach State Park.

The low-grade EF-1 tornado had estimated wind speeds of 90 miles per hour and was on the ground for two miles from 7:35 a.m. to 7:41 a.m. Monday at the eastern end of the Long Island Sound.

It began around a quarter mile east of Wilderness Point on Wilderness Road, and one home sustained minor damage with shattered glass and a beam that was lifted up a hill and dropped near another home.

Several trees were also uprooted and snapped, and a shed was toppled over. A few trees were were downed at another home across the street in a convergent pattern, with a small fence toppled over.

The tornado continued moving to the northeast with damage near a home on Isabella Beach Road, where many trees were uprooted and snapped. One tree fell over, and a piece of its trunk was forced several feet into the ground.

More significant damage occurred about a tenth of a mile from the intersection of Old Mallory Road and East End Road, where large hardwood trees were snapped, twisted and sheared off. A large branch fell through the roof of the garage on the property, and another branch
caused minor damage to the back of the roof of the home.

The tornado moved off Fishers island near the intersection of East End Road and Clay Point Road.

It was the second tornado to hit Suffolk County this month. On October 4, a tornado swept through the Ronkonkoma neighborhood with 85 mile per hour winds.

Elsewhere on Long Island, Orient Beach State Park is temporarily closed because the road leading up to it was destroyed by the nor'easter Saturday.

Part of State Parkway washed away after several high tide cycles during the storm. Contractors are getting ready to repair the damage, which will cost about $1 million, according to Long Island State Parks spokesman George Gorman. He said the cost also includes work to shore up the roadway to prevent future storm damage.

"We're estimating that it will be complete by the end of the year, however, that is weather dependent," Gorman said.

"It is a popular park," he said. "It is a location we want to reopen very quickly."

Orient Beach State Park is a 363-acre state park located on the eastern tip of the North Fork in the town of Southold in Suffolk County.