Passenger ejected through the windshield of bus in Weehawken 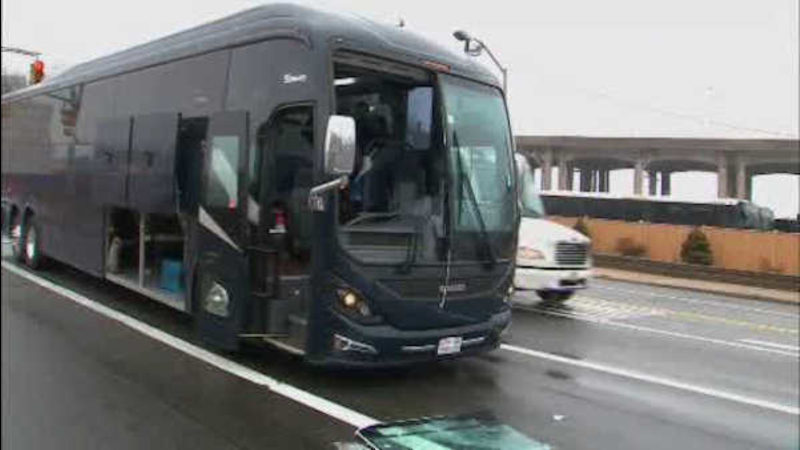 Passenger flies through windshield of bus near Lincoln Tunnel

WEEHAWKEN, New Jersey (WABC) -- A passenger was ejected through the windshield of a bus in New Jersey Tuesday morning.

The accident happened at 11 a.m. at JFK Boulevard East and Baldwin Avenue right outside the Lincoln Tunnel entrance in Weehawken.

The private tour bus from Baltimore with about 55 passengers on board was bound for Manhattan and was headed southbound on JFK Boulevard East.

Police say the bus made a sudden stop at a traffic light and the passenger went through the front windshield and landed on the street. The passenger was standing at the time.

The entire front window pane broke apart from the bus. The passenger did not go through the glass window.

The victim was taken to Jersey City Medical Center where he is in stable condition with non-life-threatening injuries.

There were no other vehicles involved. It is unclear why the bus driver stopped short.

There is no impact on Lincoln Tunnel traffic; the impact to traffic is on the local street.

The bus was being operated by Gunther Charters out of Maryland. It was one of their non-stop, round-trip buses that runs between Baltimore and New York City.

The owner of the company, Martin Gunther, said he is looking into the accident, including why the passenger was standing up at the time.