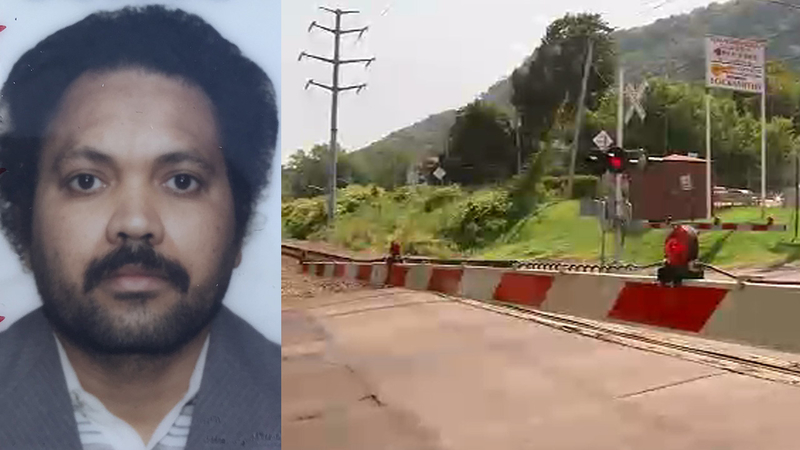 HAVERSTRAW, Rockland County (WABC) -- There are new calls for safety efforts to prevent tragedies on the tracks after a pedestrian was struck and killed by a freight train in Rockland County Wednesday.

The victim, 60-year-old Guy Dure, was struck just after 1 p.m. on the tracks near the intersection of New Main Street and Congers Avenue in Haverstraw, an intersection that has had numerous prior incidents.

Dure's grieving family laid flowers at the scene Thursday. They said Dure was special needs, high functioning but mentally challenged, and that he lived nearby at the Green Hill Adult Home. His brother had just been with him, and the devastated family believes he simply didn't hear the train coming.

"We were all going about our day, and this happened," nephew Eddie Dure said. "These are stories you hear about on the news, but you're kind of disconnected from it until it actually happens to you."

Senator David Carlucci and Assemblyman Tom Abinanti held a press conference at the scene Thursday to call on the state Department of Transportation to submit their past-due rail grade crossing safety study, as required by law.

Dure was hit by a CSX train at the notorious crossing, which has had at least seven prior incidents involving trains between 1979 and 2017, according to accident reports from the Federal Railroad Administration.

A truck was hit after getting stuck on the tracks last year, and in 2003, a truck driver was killed when his vehicle was struck by a train.

In 2016, Governor Andrew Cuomo signed Carlucci's and Abinanti's legislation requiring the DOT to conduct a comprehensive review of all 5,304 railroad crossings throughout New York State to assess their safety and identify any available funding for safety upgrades.

The safety study was due to the governor and Legislature on or before April 1, 2017, and to date, almost a year and a half later, the report has not been submitted.

"I wonder at what point the failure constitutes negligence," Abinati said. "At what point do the governor and the state Department of Transportation bear some responsibility for all the deaths by railroad?"

The lawmakers say they hope this most recent fatal accident will highlight the urgency and importance of DOT action.

"The only way something gets done at these rail crossings is if someone dies," Carlucci said. "We can't allow that policy to continue."

A CSX spokesperson issued the following statement to Eyewitness News:

"Yesterday at approximately 1:10 p.m., a CSX train headed north struck a pedestrian on the railroad tracks near the intersection of New Main Street and Conger Avenue in Haverstraw, NY. The Town of Haverstraw Police Department responded to the scene and confirmed that the individual was fatally injured. CSX personnel continue to support local law enforcement in their investigation of this incident. We appreciate the prompt response provided by the local authorities and extend our thoughts to those impacted by this tragic event."