'Messed with the wrong family:' North Carolina dad fights back against secret peeper he found in child's bedroom 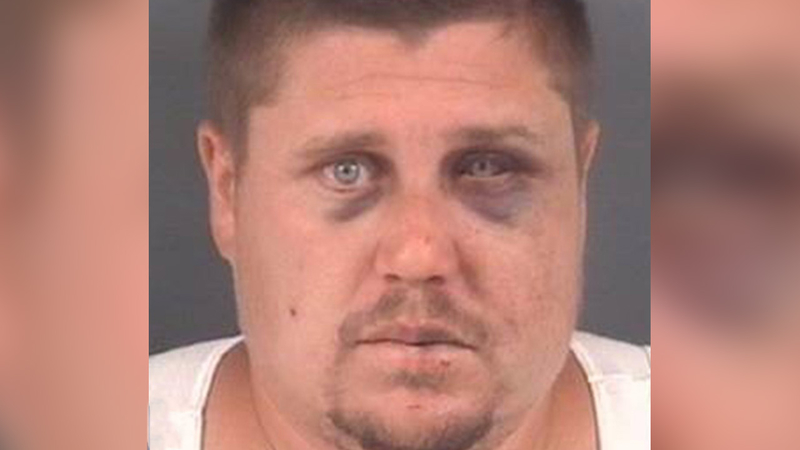 FAYETTEVILLE, North Carolina -- A North Carolina dad fought back against a secret peeper he caught near his young daughter's bedroom -- so hard that the suspect had to be rushed to the hospital.

It all happened Tuesday night.

"He's put ultimate fear in me. I don't sleep," the girl's mother, Ashley Lara, told our sister station WTVD-TV. "I can't even not see his face when I close my eyes, and to know he was trying to enter my little girl's room ... it's just devastating to me."

She said the peeper was caught on her neighbor's surveillance camera walking into their Fayetteville home moments before he was caught.

"I then proceeded to hear my husband get up, and he just looked at me with a pale white face and said, 'Stay right there. Somebody is in my backyard,'" she said.

Her husband found the suspect running out of the door that leads to their 2-year-old's bedroom.

Lara called 911 but her husband didn't wait for help to arrive.

"He did get him down and messed him up pretty bad," she said.

The suspect, Steven Michael Dunning, was rushed to the hospital and charged with secret peeping.

WTVD reported on him back in 2017 when he was charged with the same thing.

"They found handprints on the back window from him trying to push it open," Lara said. "Then on top of that, they found that he was ejaculating back there in a white T-shirt that he had in his hand."

Dunning has also previously been convicted of cyberstalking. That's how the family believes he got their address.

The family has new surveillance cameras keeping watch over their home. But Lara is thankful for her husband who kept them safe. She said Dunning should be thankful too.

"I think he needs to be grateful that he has a beating heart right now. Because what he did was completely wrong," she said.

Dunning will be taken to the Cumberland County Jail once he's released from the hospital. Lara's husband will not face charges. Meanwhile, mom has a message for Dunning:

"I would like to say to Steven Dunning that he is a disgusting, mentally insane, sick person and shame on him. He won't be doing this again. You messed with the wrong family and, trust me, my family will not stop until you're put away and served what you need to be served. You got off for too long and you went to the wrong house."
Report a correction or typo
Related topics:
north carolinapeeping tomsurveillancesurveillance video
Copyright © 2022 WTVD-TV. All Rights Reserved.
TOP STORIES
19 kids, 2 teachers killed in TX school shooting; gunman's mom speaks
Uvalde victims latest: Slain teacher's husband dies of heart attack
Onlookers urged police to charge into TX school: 'Go in there!'
'Goodfellas' and 'Field of Dreams' actor Ray Liotta dies at 67
AccuWeather Alert: Heavy thunderstorms to kick off holiday weekend
Adams meets with NYC business leaders in wake of subway shooting
Uvalde man says his daughter was killed trying to call 911 on shooter
Show More
Massive retail theft operation busted, over $3.8M in goods recovered
NYC park benches to display social action murals painted by students
Cancerous basketball-sized tumor removed from NY man's liver
NJ softball team reaches fundraising goal for Puerto Rico tournament
NJ officials declare Jersey Shore, lakeshores ready for summer
More TOP STORIES News