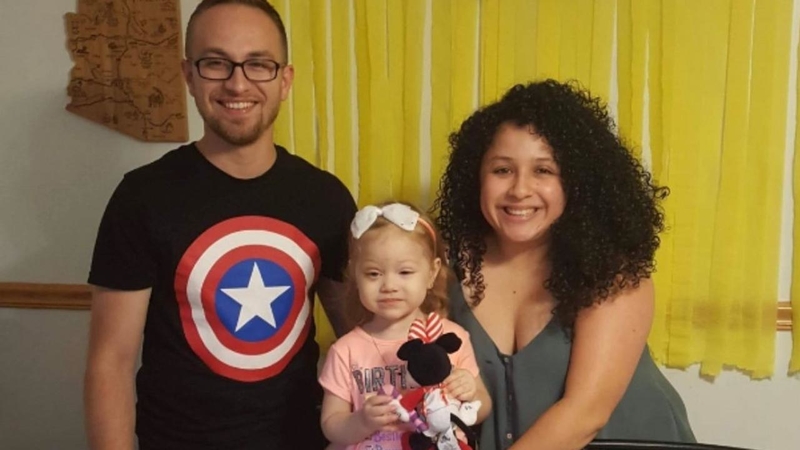 Penelope "Penny" Lindsay passed away on February 18, 2021, after her courageous battle with neuroblastoma.

"She was amazing," mom Cassandra Izquierdo said. "She was so strong. If she wasn't bald, you wouldn't have known she had cancer."

Penny was diagnosed with cancer one week after her second birthday, after her parents spotted a bruise by her eye.

"The tumor was behind her eye, in her sinus, in her lower jaw, the other side," Izquierdo said. "It was everywhere, and we would've never noticed."

Toni Yates reports on the 11-year-old who got the surprise of a lifetime thanks to Make A Wish New Jersey and Jersey Mike's.

On Tuesday, her wish was granted through the presentation of a donation to Tackle Kids Cancer alongside her parents to honor Penny's memory and help other children fighting their own battles with pediatric cancer.

"We wanted to give back so Penny can help the future of pediatric cancer," Izquierdo said.

They also learned the donation would be double what they thought, with $10,000 to provide Tackle Kids Cancer with essential funds needed to continue their work in supporting clinical trials and funding innovative patient care and translational research at Hackensack Meridian Center for Discovery and Innovation.

Make-A-Wish New Jersey presented Penny's wish with special guests from the Giants, including former Giants quarterback and #TeamTKC Captain Eli Manning, who joined the ceremony and visited with Cassandra and Jack to honor Penny's wish and her legacy.

Manning said kids like Penny and fighting to cure pediatric cancers make days like this so important.

"You reflect back on your childhood, and just how easy it was," he said. "It was being outside and running around and smiling and laughing and going to school and friends and family, and it was carefree and so easy. And then you see a child that's going through chemotherapy, and they don't feel well, and they're in and out of the hospital for months or years. And you want to help them in any way possible."

The Giants and Manning have been longtime supporters and friends to both Make-A-Wish and Tackle Kids Cancer.

Since 2015, Manning has continued to support Tackle Kids Cancer in an extensive media campaign and created Eli's Challenge to motivate grassroots group fundraisers, which has raised substantial funds for the ground-breaking initiative.

During his time with the Giants, Manning and his teammates worked closely with Make-A-Wish and granted nearly 70 wishes to children with critical illnesses from across the country.

In 2013, they were recognized with the Chris Greicius Celebrity Award, a national recognition of celebrities, athletes, sports teams and entertainment entities who demonstrate excellence and a commitment to the mission of Make-A-Wish.

Penny's wish was granted at the Samuel & Josephine Plumeri Wishing Place, home of Make-A-Wish New Jersey, in Monroe Township, with a beautiful sun shining overhead. It's their reminder that Penny is still present.

"Every time we see the sun, it's just this warm feeling," Jack Lindsay said. "It's different than before her passing."