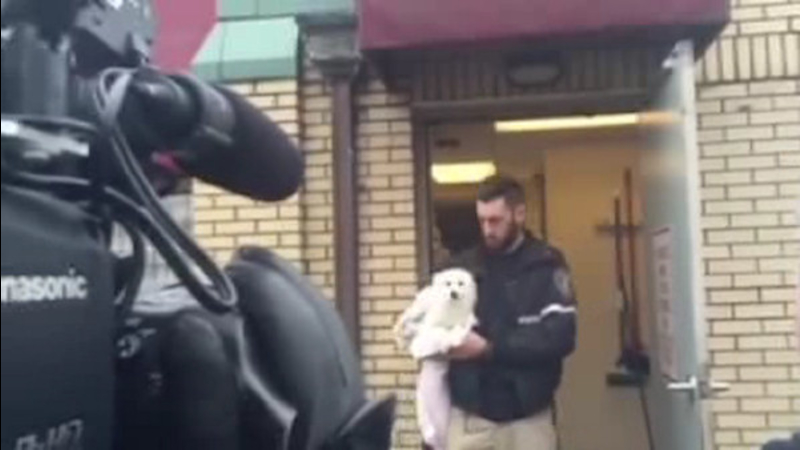 The shop in Woodbridge called "Fancy Pups" was shut down by police and the owner was arrested.

There are six remaining dogs of the 13, most of them confiscated from a puppy store on St. Georges Avenue in Woodbridge.

They have been put under quarantine in a temporary holding trailer at the animal shelter there because they have many health issues, including parasites.

"It's a disease they all have from being in unsanitary conditions," said Dennis Green, the Director of Health and Human Services.

Animal Control and the state SPCA says the store and its owner has racked up violations for a long time, including complaints from customers that he sold them sick animals.

"He's been on our radar for some time, we shut him down earlier, he was closed," Green said.

Eyewitness News found owner Rocco Garruto at his other business, a used car lot. He also housed animals in cages there in the garage. He showed Eyewitness News and says he's done nothing wrong.

"There was no danger to the dogs," Garruto said.

But Green says the animals were obviously sick, not being treated, and in inhumane conditions.

"When you see that an animal is sick, you quarantine it. It doesn't look like he was doing that so all of them got sick," Green said.

Garruto was arrested they say, after selling animals when he was ordered to stop.

Animal welfare agencies want "Fancy Pups" closed for good. A pet fish store owner in the same strip says cleaning up starts before dogs get to the store.

"The issue of puppy mills should be addressed when it gets to the level of stores, people are just trying to make money," said Will Zajack, the owner of Aquatic Obsessions.

Garruto calls it the town's personal vendetta against him.

Garruto goes to court Wednesday evening on more than 100 counts including animal cruelty. He could face jail time. He told Eyewitness News that whatever the outcome, he has no plans to open the store again.