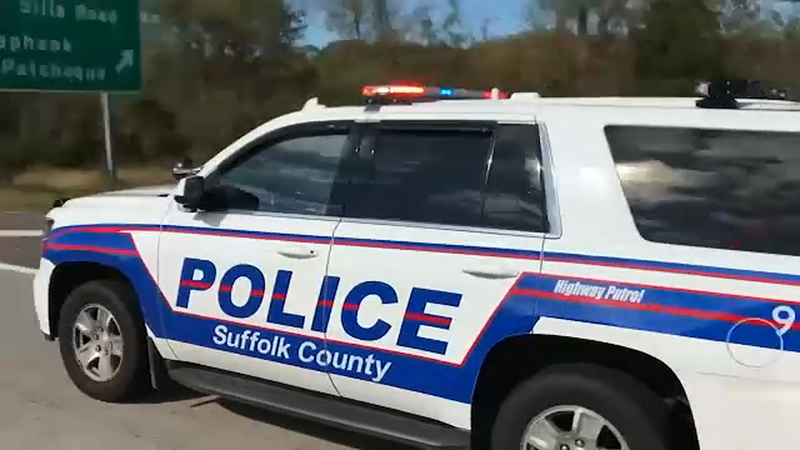 YAPHANK, Long Island (WABC) -- Two police officers on Long Island were honored Monday for their roles in a life-saving organ transplant earlier this year, and a man who received a heart transplant was reunited with the flight medic who treated him as he was being airlifted to the hospital.

LiveOnNY is the nonprofit organization tasked with overseeing organ donation and transplantation in the greater New York area, but when they weren't available to transfer a lifesaving organ from Stony Brook Medicine to a Manhattan hospital in June, Reilly and Turner ensured the organ reached the hospital with time to spare.

A middle-aged man had just died at Stony Brook, an organ donor with an otherwise healthy liver. But the recipient was 60 miles away in New York City.

"The team was stuck at Stony Brook Hospital knowing that to call an ambulance was going to take three hours," said Helen Irving, who runs LiveOnNY. "We didn't have the appropriate ambulance outside that would normally be with the surgeon to whisk him back to the city with the organ."

The weather was bad that day, so flying wasn't an option. As the transplant team raced to get ready, Officer Turner took off west on the expressway unsure of how long the trip would take.

As he raced down the highway -- with the liver in a cooler strapped into the back seat -- Suffolk police notified Nassau County police and the NYPD.

"I had to pick up the surgeon, the trauma team, and the organ," Turner said. "And when he gets in the car, he tells me, well, it was little after 10 p.m., he says, "Well, the organ has to be on the operating room table by midnight.' So with the weather and everything, it was a little bit of a time crunch. But we were able to make it."

Turner, the organ and the medical team made it to New York Presbyterian Medical Center on the Upper East Side in just 58 minutes. Neither the donor nor the recipient were identified.

Their efforts led to a successful transplant, and Turner was honored along with Reilly, his supervisor.

"We help people every day that we don't know," Turner said. "So it's good to know that somebody else was able to benefit from it."

Separately, in 2016, Ed Schaefer was airlifted by a Suffolk County police helicopter from Peconic Bay Medical Center to Westchester Medical Center for a heart transplant.

The Riverhead man was reunited with flight medic Erin Carey, who treated him during the flight.