911 call: 'There's a gigantic alligator in my kitchen and I don't know how it got there' 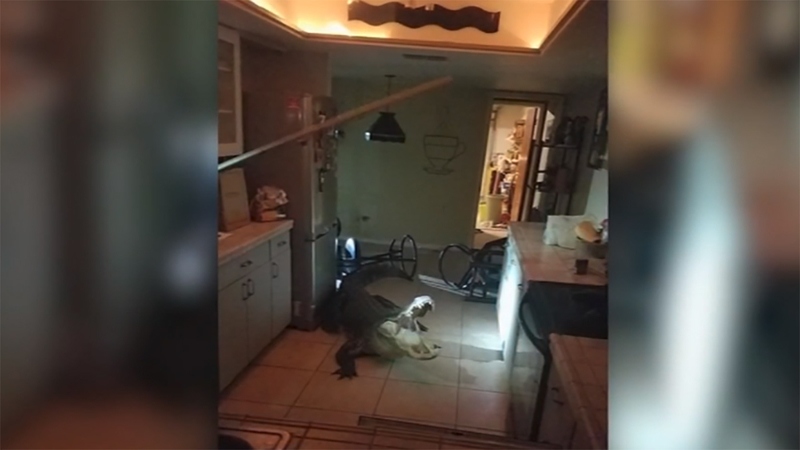 911 call: there's an alligator in my kitchen

CLEARWATER, Fla. -- File this story under the "only in Florida" category.

Audio has been released of a woman calling 911 after discovering an 11-foot long alligator sitting in her kitchen.

A newspaper delivery woman first spotted the gator thrashing around in front of the condominium complex and then heard a loud crash.

The agitated alligator had smashed through a window and was wandering inside a house so the woman called 911 to alert police of the intruder.

Minutes later it was the homeowner's turn to call and it certainly caught the dispatcher by surprise.

She told the man who answered the phone "I have a gigantic alligator who came in through my garage and is sitting in my kitchen. A huge one."

The dispatcher then responded, "I'm sorry, is it in your house?"

The woman with some excitement in her voice answered, "yes, it's huge!"

RELATED: Florida mother's frantic 911 call: 'My daughter's stuck ... there's gators surrounding her'
So the dispatcher followed up to make sure he understood that she had said the alligator was in the kitchen and the woman responded, "yes, I don't know how it got here, but it's here!"

A trapper came to remove the reptile but the excitement was far from over.

Before wrangling it, the alligator knocked over a wine shelf, breaking several bottles. This left a pool of red on the floor which may be mistaken for blood at first glance.

The alligator was eventually removed and is going to be relocated, it had a few minor cuts but nothing serious.