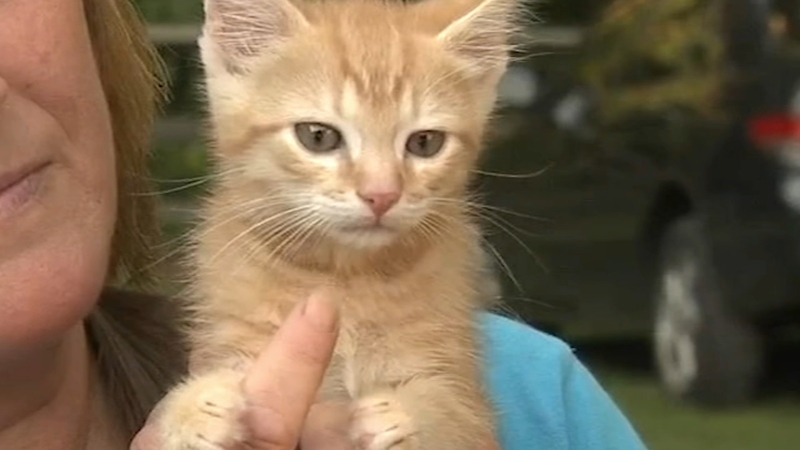 NEWARK, Delaware -- Eight-week-old Lucky the cat is living up to his namesake after he survived a harrowing incident.

Richard Maenner saved the kitten after he was thrown from the window of a moving car speeding down the highway.

"I looked over at a car doing about 70 and an object came out of the window, bounced off the guardrail and came back into the street and instantly meowed," Maenner said.

X-rays showed that Lucky had suffered multiple breaks in his leg, which were so severe the leg needs to be amputated.

Lucky is now in the care of Maenner, his fiancee Leslee Houser, and their kids.

So who could do this to a defenseless animal?

"Idiots," said Houser. "I don't understand it. He's such a cute, lovable kitten. I just can't imagine it."

The incident occurred on I-95 south on May 25. Maenner was working construction and said he thinks the cruel person who threw him was trying to toss him over the bridge and into the river but missed.

He said he did not file a report because he didn't see the vehicle, but the couple has not ruled out going to the Office of Animal Welfare.

Lucky has already endured six trips to the veterinarian, thanks to the generosity of strangers who have helped the family. Unfortunately, he still has a long and expensive road ahead.

After his leg is amputated, doctors expect him to adapt to moving around on three legs, especially with the loving care he is getting from his new family.

"I feel very lucky he is in my life," Maenner said. "We're lucky, even though his name is Lucky."