"He said, 'not only will I come, I want to make sure she feels like a princess.'"
ABCNews
By Linsey Davis 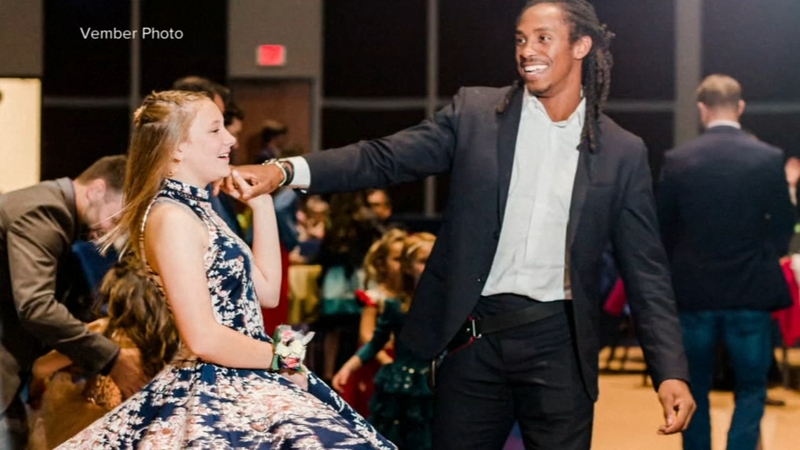 PHILADELPHIA -- A Philadelphia Eagles player went deep in the heart of Texas to make a girl's dream come true.

In all of Audrey Soape's 11 years, last year was the worst. She unexpectedly lost her father and then her grandfather.

So when it was time for her school's "Daddy-Daughter Dance," her mother, Holly, swung into action, reaching out on social media to Audrey's favorite football player - Eagles safety Anthony Harris.

"It's kind of far-fetched...it's a big ask," Holly said. "I just asked if he would come, if he'd be willing to come. And he said, 'not only will I come, I want to make sure she feels like a princess.'"

"I heard about it about a week before the dance. And at first, I was like really nervous," Audrey said. "I was kind of worried all week that I was going to mess up dancing."

Harris didn't just fly in for the dance, he also covered the cost of Audrey's dress, shoes, hair and makeup.

"He had a car with a driver, come to the house and pick her up," Holly said. "He really wanted to make sure she had the best possible time."

He also made time to meet her brother Jackson.

"It made me feel really happy and feel special because he didn't only come over just to go to the 'Daddy-Daughter Dance' with Audrey, he came over to see me, too," Jackson said.

The special night was all captured by a professional photographer.

"I was very happy, and I also felt very special because not a lot of stuff happened to people like this, and especially me," Audrey said.

While the Eagles didn't suit up last weekend, Harris still suited up for a big dance, which the Soape family is chalking up as a personal win.

"We would all do anything for our kids when we see them suffering," Holly said. "To know that there are people out there who will also help be there for your kids and for you, it's really encouraging for me, and it's sort of turned this horrible tragedy into sort of this triumphant moment."
Report a correction or typo
Related topics:
sportsphiladelphiatexasphiladelphia eaglesu.s. & worldfeel good
Copyright © 2022 ABC News Internet Ventures.
PHILADELPHIA EAGLES
Answering the 2022 NFL draft's biggest questions: Experts debate fa...
NFL 2022 schedule release: Best trolls and creative edits from teams
NFL draft order 2022: All 262 picks over seven rounds, plus team-by...
NFL draft: Which teams have gotten the best value since 2012? We ra...
TOP STORIES
Hero security guard, shoppers among Buffalo shooting victims
What we know about the alleged gunman in the Buffalo mass shooting
Travel Advisory issued in NYC for Monday due to severe storms
AccuWeather Alert: Gusty storms
9-year-old girl found dead in Brooklyn apartment
Suspect fired 50 rounds in Buffalo shooting that killed 10: Police
Rangers beat Penguins 4-3 in Game 7 OT
Show More
NYPD officer recovering after bitten in head by pit bull
1 killed, 5 hurt in California church shooting, authorities say
Semi-automatic used in mass shooting purchased legally in upstate NY
Livestream of Buffalo mass shooting removed in under 2 minutes: Twitch
NYPD stepping up patrols outside Black houses of worship
More TOP STORIES News