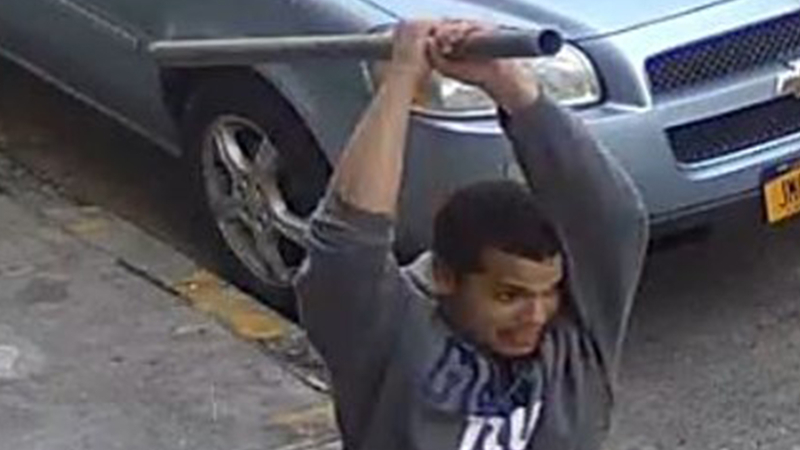 MOTT HAVEN, Bronx (WABC) -- Police say a suspect is in custody after a woman was brutally attacked in the Bronx with a metal pipe and a boy was slammed to the ground.

24-year-old Manuel Jimenez is charged with attempted murder and acting in a manner injurious to a child less than 17.

The woman was walking near Walton Avenue and East 144th Street in the Mott Haven section at around 3 p.m. when the man approached her from behind.

He then hit her with a metal pipe. The 58-year-old victim suffered a broken arm and was taken to the hospital.

It's not the first time the suspect hurt someone, according to investigators.

The week prior, police say that around 1:30 p.m. near Willis Avenue and East 144th Street, he approached a 13-year-old boy.

He apparently put his hands over the victim's eyes and slammed him to the ground.

"He just covers my face and just tackles me on the ground," said the boy, 'Angel'. He is a brave 9th-grader in the South Bronx who managed to keep himiself safe in the attack and suffered minor injuries.

Residents along East 144th Street, where the attacks occurred, recognized the suspect as an emotionally disturbed man receiving treatment in the area.

"He has his moments but we didn't' know he'd have his moments like coming over here and hurting people," said South Bronx resident Jasmine Cruz.

"He's got his own psych and everything, I don't know why he's doing this," said South Bronx resident Miguel Pagan.

Surveillance video shows the suspect sticking around with Angel for a full minute after he attacked him, even hugging him at one point, apologizing.

Angel and his family tell us the man also professed to be a police officer.

"So he definitely told you he was a cop at one point?", we asked Angel.