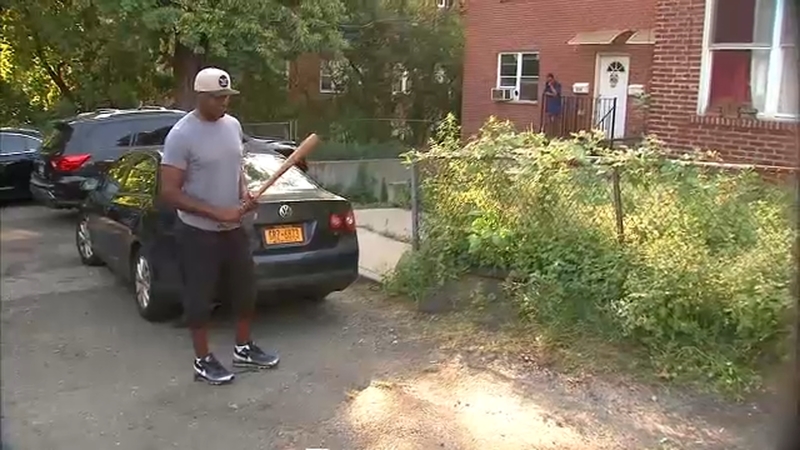 RIVERDALE, Bronx (WABC) -- A 4-year-old girl was seriously injured when a pit bull suddenly attacked her in the Bronx Wednesday morning, and a hero good Samaritan may have saved her life by beating the dog with a baseball bat.

It happened on Forster Place around 8 a.m. in the Riverdale section, where authorities say it appears two dogs escaped from a fenced-in area.

The girl was waiting for a school bus with her family when she was bitten in the face by one of the animals.

Neighbor Bobby Mahoney tells Eyewitness News that he saw the dogs roaming as he was getting his daughters ready for school. He shut the door and called 911 when he realized they seemed aggressive.
EMBED More News Videos

Moments later, the family came walking down the street and was attacked.

"I came outside with the bat and had to beat the dog to get it off of the little girl," Mahoney said. "A neighbor was out here beating it with a pocketbook. So we tried to beat him off with anything we could."

He said he struck the dog 15 to 20 times with the bat before the animal released her.

The girl was rushed to Jacobi Hospital, and perhaps thanks to Mahoney, she is expected to survive.

The dogs, neighbors estimate, are each about 50 pounds. The one that attacked the girl ran off but was later captured by authorities.

Neighbor Michael McGivaren said he has been concerned about the dogs and that he fortified the fence that separates his property and the area where the dogs are kept.

"They are hyper aggressive, one not so much as the other but they both get each other worked up," he said. "I've reinforced the fence with boulders. We have very long painters ladders that are leaning up against the fence so the dogs can't get through."

Police say that both dogs were handed over to the ASPCA. The owners will not be charged because the dogs pushed themselves through a fence.