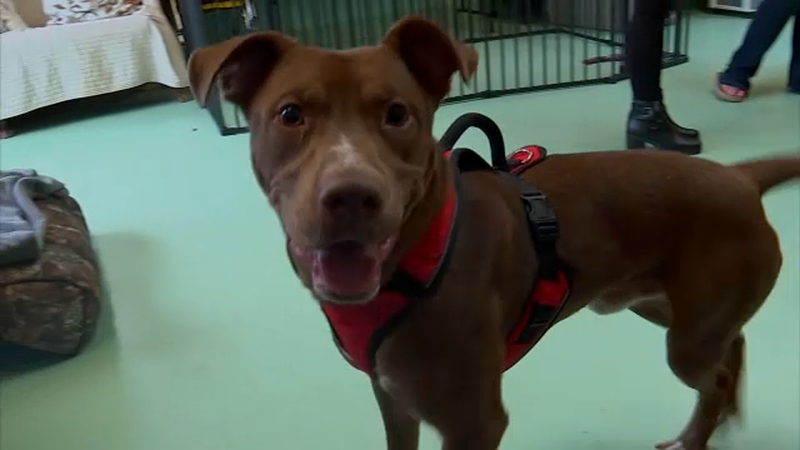 PECONIC, Long Island (WABC) -- A puppy violently tossed into a dumpster in Georgia and then housed at a kill shelter for seven months is finding a new home on Long Island.

The 1-year-old Pitbull, who has been named Justice, arrived at the North Fork Animal Welfare League two weeks ago.

"I heard about his story and said we'll take him!" League Director Gabby Stroup said.

In August, Jason Keith Kelley, of Rome, Georgia, was arrested for flinging Justice into the air by his leash and throwing him into a dumpster. The force crushed Justice's larynx.

In surveillance video of the incident obtained by Eyewitness News, Kelley begins to walk away from the dumpster, but then turns around to close the dumpster cover. He then gets into a car.

Police also arrested Tonya Trapp for the incident although she is not seen in the surveillance video. Her relationship to Kelley is not clear.

Thankfully, someone heard the dog in the dumpster and pulled him out.

Justice then spent seven months at a kill shelter in Georgia. The shelter transported him to North Fork Animal Welfare League in Peconic two weeks ago.

Christine Dunne, of Holtsville, saw the video of Justice and called the League right away to apply to adopt Justice.

"That was it," she said. "I was sold. I got in the car this morning to come see Justice."

"One dog is nicer than the next," Stroup said. "They have perfect dispositions. These shelters want to send you the best dogs, so you take more dogs."

Stroup said when the League gets transports on Saturday mornings, people line up outside their door to see the dogs.

Stroup said people come from as far as Connecticut and Massachusetts to adopt their dogs.

She said they have access to so many dogs at the kill shelters that people can even request what type of dog they would like, including breed, size, gender and temperament.


"It might take a little while, but we can get it," Stroup said.

The League has established a new Fund in honor of Justice called The Justice Fund where you can donate. They are raising money to transport neglected and abused dogs to their facility.