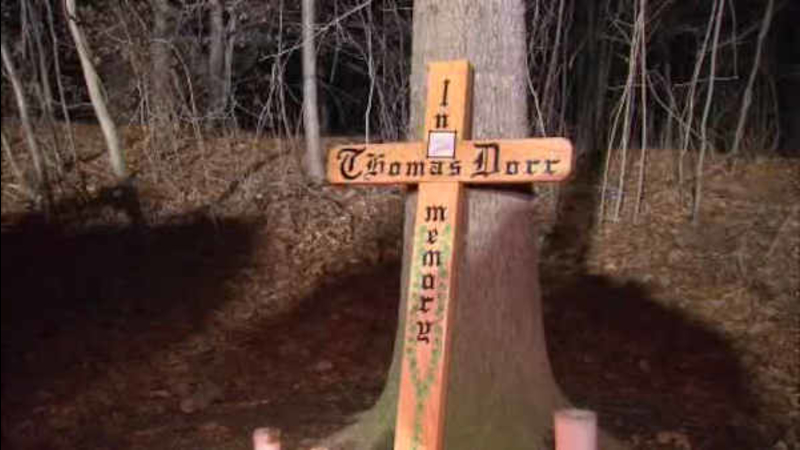 PLEASANTVILLE, N.Y. (WABC) -- There has been a new call for justice in the case of a Pleasantville volunteer firefighter murdered nearly 20 years ago.

Thomas Dorr, 50, was killed in Graham Hills Park in Mount Pleasant in 1996. He had been bludgeoned and his throat was slit.

Decades later, his friends, family and police are demanding answers.

The murder was a complete shock to his friends and fellow volunteer firefighters in Pleasantville.

"Tom was about 6'7" in stature with a heart of gold. We called him a gentle giant," said Dorr's friend, Robert Allo.

Each January, friends have held a vigil, hoping for an arrest in the case. Dorr was found just yards from his house under two feet of snow.

His wife claimed he disappeared while heading to the firehouse during the Blizzard of 1996.

But police have labelled Dorr's wife and her son the prime suspects.

"I think everyone knows who did it, they just can't prove it," said the victim's friend John Brooks. "So it's a long time for nothing to happen."

Indeed it is a murder, but not exactly a mystery. Police believe the killing was the result of an argument between Dorr and his drug-addicted stepson.

"We believe he was going to New York City to buy heroin and he denied the request to use the car," said Westchester County Police Lt. Jeffrey Hunt.

Wednesday, Dorr's friends and Crime Stoppers announced an increase of the reward in the case to a total of $6,000.

Police say they hope it will jump start the investigation, which stalled when family members lawyered up, after they allegedly tampered with the crime scene and destroyed evidence.

"It's sad that somebody that was loved by so many people, it's sad that the family won't come forth and share some light into actually what happened to Tom," said Allo.

Friends are hoping the passage of time leads to someone clearing their conscience. As the plaque at the tree planted in Dorr's memory reads, "May justice be done."