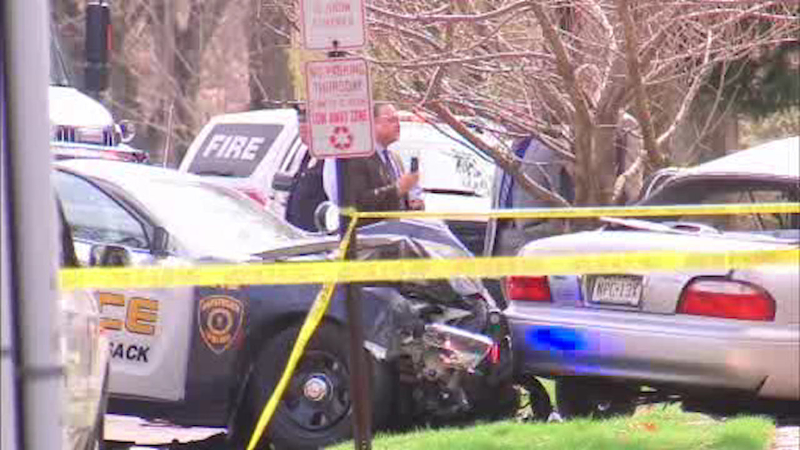 MAYWOOD, New Jersey (WABC) -- A police chase of a motorcycle in New Jersey led to separate crashes early Thursday afternoon, one of which involved a police officer.

Authorities say the incident started as a pursuit in Paramus around 1:54 p.m.

Paramus Police officers spotted a 2016 Yamaha R1 motorcycle, color black, driving at a high rate of speed, zigzagging between lanes on Route 17 north in the area of Ridgewood Avenue.

The officers attempted to stop the motorcycle using their lights and sirens.

Instead, the motorcycle sped away at a faster rate of speed north on the highway.

It made a U-turn at Linwood Avenue then proceeded south on Route 17. The original Paramus officers could not catch up to the motorcycle. Several minutes later, the motorcycle sped past another Paramus unit which also attempted to stop the motorcycle.

The Paramus unit followed it south on Route 17. The motorcycle then slowed down and drove into the parking lot of the Garden State Plaza. It then crossed the bridge into the Ikea parking lot then proceeded back onto Route 17 south then onto Route 4 Eastbound.

The Paramus Unit lost contact with the motorcycle on Route 4 eastbound in the area of the Paramus-River Edge border. The Paramus officers terminated their pursuit at this time.

A short while later the Maywood Police Department advised that they believed that the motorcycle had struck a car on Spring Valley Road in Maywood and that they had the driver at the scene of the crash.

At this time witnesses stated that the motorcycle was not being chased by the police at the time of the crash but was speeding.

After being dispatched to assist at the accident scene, a Hackensack Patrol unit was involved in a collision with a vehicle at Summit and Ross Avenue in Hackensack. The collision resulted in the death of the driver, a 67-year old male from Hackensack.

Paramus officers arrived at the crash site and identified the driver and motorcycle as being the same as the earlier pursuit.

The driver who is identified as Salvatore Deangelis, 31, was placed under arrest and transported to Hackensack University Medical Center for moderate non life-threatening injuries.