WABC
EAST NEW YORK, Brooklyn (WABC) -- The NYPD has released video of a group of 10 suspects involved in a gang murder in Brooklyn that authorities are comparing to the #JusticeForJunior case that sparked nationwide outrage.

Police describe the fatal shooting, which happened on Elton Street in East New York on March 19, as random and unprovoked, and they likened it to the deadly attack on Lesandro "Junior" Guzman.

The 21-year-old, identified as Tyquan Eversley, was fatally shot after being chased down by the group, and through numerous surveillance videos, detectives were able to track the chasing of the victim down streets and through backyards.

Eventually, he jumped over a fence and landed on another fence, where he became stuck in barbed wire.

While he was trapped, one man threw a large rock at him before another shot him multiple times.

WANTED FOR MURDER: multiple subjects wanted for this brutal & brazen gang murder which left a young man dead in the East NY section of Brooklyn on March 19, 5:15pm. If you know any of these individuals or have info, call CRIMESTOPPERS @NYPDTips 800-577-TIPS #YourCityYourCall pic.twitter.com/ATkl7CCZAM

Eversley was rushed to the hospital, where he was pronounced dead.
EMBED More News Videos

Naveen Dhaliwal has the latest on a man fatally shot in Brooklyn.

Authorities have already arrested one suspect, identified as 25-year-old Michael Reid, and charged him with murder and criminal possession of a weapon. He's accused of throwing the rock.

The other nine -- including the gunman -- are still being sought, and while the identities of four are known to police, they are asking for the public's help in identifying the rest.

A closer look at the individuals shown in the video. If you know who they are, contact @NYPDTips anonymously at 800-577-TIPS. Every call, every tip matters! pic.twitter.com/OVsitnXiOl

Police made the grim comparison of this attack to the one on Guzman, who was dragged from a bodega in the Bronx and killed with a machete last June.

"This is a gun, not a machete or a knife, but you have gang involvement and literally hoodlums with no fear of the law organized, driving around in cars looking for this individual and chasing him down and killing him," NYPD Chief of Detectives Dermot Shea said. 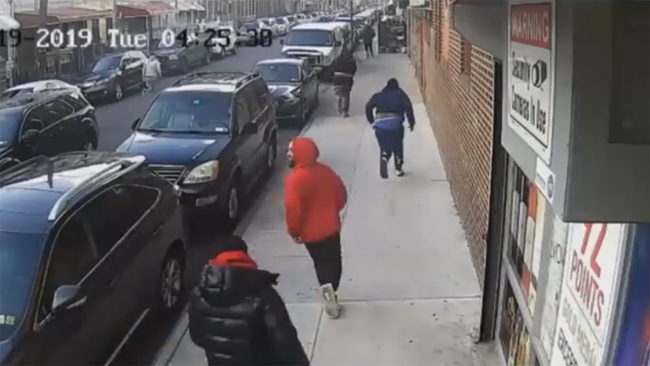