Two officers from the 23rd Precinct managed to pull the victims out of the smoke and fire of an apartment at the Carver Houses on East 102nd Street.

The officers heard people screaming who were trapped upstairs on the 9th floor when smoke from the fire that started in a stairwell billowed up into the apartments.

"They're hearing out the window, 'I can't breathe, help me, help me," said eyewitness Sherry Robeck
The two police officers, Flavio Chauca and Jason Truglio, charged into the smoky stairwell and ran upstairs to rescue the residents.

They directed residents to the stairwell that didn't have smoke, and then they got to the 9th floor.

"It was thick black from floor to ceiling and so we had to get down on our hands and knees," said Officer Truglio. "We made our way up to the door and as we opened the door to the 9th floor, the smoke was so black and so thick we couldn't see anything."

It was silent so the two men started to leave until they heard a man screaming for help.

"We heard someone yelling and I just thought I couldn't leave this guy up there," said Officer Truglio.

So they went back into the smoke and pulled him out. They helped several people to safety.

The officers were treated for smoke inhalation and released.

"I think they were pretty courageous. Nice to see NYPD on the job and really just helping people," said Robeck.

Both officers have been with the NYPD for two years. 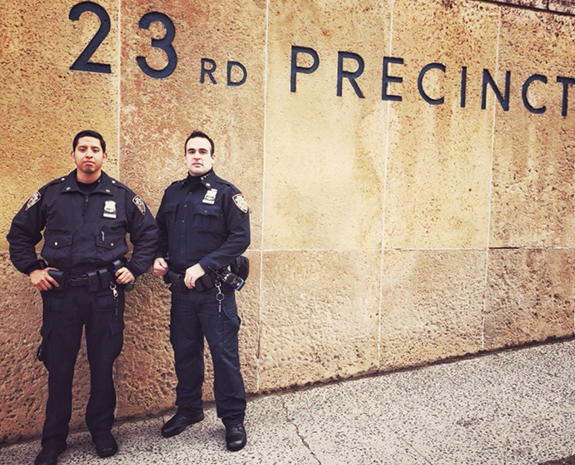 Six other people were hurt in the fire.
The FDNY said the blaze started when a mattress was intentionally set on fire.