Police search for suspect after 3, including innocent bystander, fatally shot in Bronx 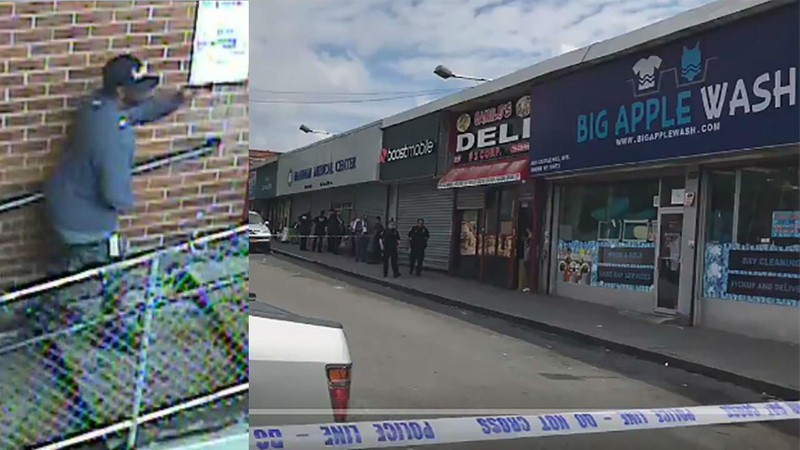 Police search for suspect after 3, including innocent bystander, fatally shot in Bronx

CASTLE HILL, Bronx (WABC) -- A manhunt is underway after three people were fatally shot in the parking lot of a Bronx strip mall Thursday morning.

The shots were fired just after 9:45 a.m. on Castle Hill Avenue.

Police believe the shooting stemmed from a large fight in the parking lot of a nearby store, but neighbors say the two men who were killed, Christopher Alleyne and Mustafa Tarver, were friends and lived across the street. Authorities believe they were the targets of the gunman.

Witnesses said the woman, later identified as Arileida Jimenez, also lived nearby and was sitting at a table handing out medical brochures at the time of the shooting.

One witness said he couldn't believe what was unfolding in front of him. He said the shooter was firing profusely, one shot after another.

All three victims were taken to Jacobi Medical Center where they were pronounced dead.

No arrests have been made and the NYPD said they are looking for one suspect. He's described as a dark-skinned male wearing all-dark clothing. He fled the scene toward Randall Avenue.
EMBED More News Videos

Police have released surveillance video of the person suspected in a triple fatal shooting in the Bronx.

PS 36, a nearby elementary school, had a shelter in place following the shooting.

"Safety always comes first, and out of an abundance of caution, PS 36 in the Bronx temporarily sheltered-in due to a potential threat in the area. All students and staff are safe, and the shelter-in has been lifted," officials said regarding the shelter in place.