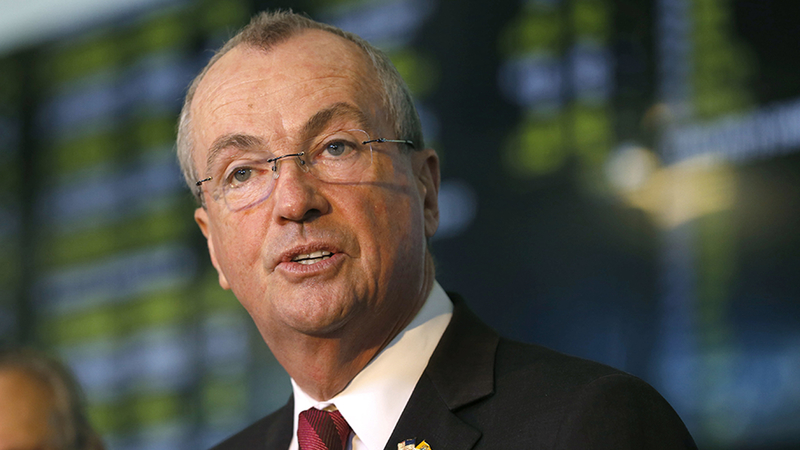 He says the proposals, when paired with previous steps the governor and members of the legislature have taken to reduce gun violence, will further solidify New Jersey's standing as a national leader in gun safety.

"Half of New Jersey's gun homicides occur in only five cities, and the number of gun crimes in these cities has skyrocketed over the last year," he said. "We cannot sit back when we know there is more to do to address the danger of gun violence in our communities. By taking the steps we are announcing today, we will further commit to making every block and every street in our state safer."

The governor is moving to make sure all gun sales are traceable and for better record keeping of ammunition sold in the state.

One of the six women who developed an extremely rare, severe type of blood clot linked to the Johnson & Johnson vaccine is from Pennsylvania.

With gun violence on the rise, Murphy is pushing a new legislative agenda to tackle a problem that is once again escalating in the nation's cities. Recently, there was shooting that injured a 2-year-old in Newark and another involving a 63-year-old grandmother.

Officials say 80% of the guns on the streets of New Jersey come from out of state, and much of the effort is combating the problems in communities of color where most gun crimes occur.

"We are tired of funerals and memorials," Oliver said. "Growing up in Newark, I tell young people I could go to any section of this city by myself or with my friends. Our young people cannot do that today."

The governor plans to add more state money to programs that help community activists who are trying to deescalate tensions on the street, and Murphy highlighted a number of objectives to deal with gun violence.

Funding Gun Violence Prevention Measures
--Increasing Violence Intervention Funding: Cities and states across the country have been demonstrating that we can achieve rapid, sustained reductions in shootings by investing in evidence-based, community-driven strategies like group violence intervention, relationship-based street outreach, and hospital-based violence intervention programs. Though the FY2022 budget process, Governor Murphy proposes an additional $10 million in funding for these initiatives in New Jersey.

--Dedicating $2 million to Rutgers GVRC: Governor Murphy established the Gun Violence Research Center at Rutgers University due to the federal government's failure to dedicate funding to research gun violence as the public health epidemic that it is. The Governor's FY2022 Budget proposal will dedicate $2 million to help the DVRC collect much-needed data in this area.

Supporting Gun Violence Prevention Legislation
--Requiring Firearm Safety Training: S-2169/A-5030 (Weinberg/Reynolds-Jackson) would modernize firearm ID cards, as well as require completion of a firearm safety course in order to receive a permit to purchase a gun or receive a firearm ID card. Connecticut, California, Hawaii, Illinois, Rhode Island, Maryland and the District of Columbia all have laws requiring individuals to undergo safety training prior to being able to purchase.

--Mandating Safe Storage of Firearms: Owning a firearm for protection in the home can present a substantial obstacle to safe firearm storage, with individuals often opting to keep weapons loaded and easily accessible. Last legislative session, the Assembly passed A-3696/S-2240 (Downey/Gopal) requiring firearm owners to store the firearm in a securely locked box or container; in a location where a reasonable person would believe to be secure; or to secure the firearm with a trigger lock.

--Raising Minimum Age to Purchase Long Guns to 21: Under current law, a person 18 years of age and older may obtain a firearms purchaser identification card and a handgun purchaser is required to be at least 21 years old. The bill (A-1141/S-3605, Freiman/Cryan) increases from 18 to 21 the age at which a person is eligible to receive a firearms purchaser identification card used to purchase shotguns and rifles but would still allow for those at least 18 to possess a long gun for purposes of hunting; military drills; competition; target practice; training; or under the supervision of a parent or guardian.

--Promoting Microstamping Technology: Microstamping technology provides law enforcement with the tools to quickly link firearm cartridge casings found at the scene of a crime to a specific firearm, without having to recover the firearm itself. The technology essentially creates a "license plate" on cartridge casings to identify the gun that was used to shoot the ammunition. Last legislative session, S-112/A-1098 (Weinberg/Downey) would require within a year that firearm manufacturers incorporate this technology into new handguns sold in New Jersey.

--Establishing Electronic Ammunition Sales Recordkeeping: The State Commission of Investigation (SCI) issued a report in 2016 finding that straw purchases of ammunition were unchecked because firearm IDs lacked photo identification. The SCI also found that sales records were often hand-written into log books - a problem for law enforcement, which should be able to consult an electronic database when it investigates questionable ammunition purchases. A-1292/S-1481 (Greenwald/Weinberg) would require manufacturers or dealers of handgun ammunition to keep a detailed electronic record of ammunition sales, and report ammunition sales to the State Police.

--Banning .50 Caliber Firearms: Military-style .50 caliber rifles are banned or restricted in several other states. California has a complete ban on .50-caliber rifles, Connecticut bans specific models and Maryland has some restrictions. S-103/A-1280 (Gill/Greenwald) would revise the definition of "destructive device" under New Jersey law so that it includes weapons of .50 caliber or greater.

--Closing Loophole for Importing Out-of-State Firearms: Individuals who move to New Jersey from another state are allowed to bring their legally acquired guns with them without registering the guns according to New Jersey law. A-3686/S-372 (Vainieri Huttle/Cryan) would close this loophole by requiring firearm owners who move to New Jersey to obtain a firearm purchaser identification card (FPIC) and register their firearms within 30 days of residing in this State.

--Holding the Gun Industry Accountable: In New Jersey, almost 80% of guns used in crimes are originally purchased outside of the state. However, the gun industry has failed to take any steps to stem the flow of guns to the illegal market through gun shows, flea markets, straw purchasers, and theft. The industry has also failed to make its products safer and has engaged in unscrupulous marketing. A bill recently introduced in the New York Senate would hold gun manufacturers liable for the public harm they cause by amending the state's public nuisance laws to prohibit the gun industry from endangering the safety or health of the public through its sale, manufacturing, importing or marketing of guns. Governor Murphy proposes similar legislation.

Anthony Johnson reports on the the $94 million renovation to restore Hinchliffe Stadium in Paterson.

Additional Measures
--Regulating School Shooting Drills: New Jersey schools currently are required to conduct active shooter exercises but guidelines are vague on how drills should be conducted. Governor Murphy proposes authorizing the Department of Education to establish trauma-informed and age-appropriate standards for lockdown drills including encouraging preparation over simulation; barring use of simulated gunshots; advanced notice to parents about planned drills; durational limits; training; and prohibiting rewarding children for fighting off potential gunmen during a drill.

--Reconvening Historic "States for Gun Safety" Summit: New Jersey was poised to host a multi-state summit in Newark last year on gun-safety issues - a first-of-its-kind event organized by a coalition of states that formed three years ago in response to persistent inaction on gun control at the federal level. The all-day summit was expected to draw governors and officials from New Jersey, Connecticut, Delaware, Massachusetts, New York, Pennsylvania, Rhode Island, and the Commonwealth of Puerto Rico, but was cancelled due to the COVID-19 pandemic. The multi-state effort has involved a sharing of data among the member states, including the exchange of information about illegal trafficking and about those disqualified from owning firearms. Governor Murphy intends to reconvene the Summit in the Summer of 2021.

--Announcing Nominations to the Personalized Handgun Authorization Commission: Governor Murphy today announced that he will soon file nomations to the so-called "Smart Gun Commission." The commission aims to bring together industry experts, business representatives, and advocates for discussion of gun violence in New Jersey.

These reforms are in addition to previous steps Murphy and the Legislature have taken to combat gun violence.