Democratic candidates for NYC mayor back on the trail after tense, fiery WABC debate 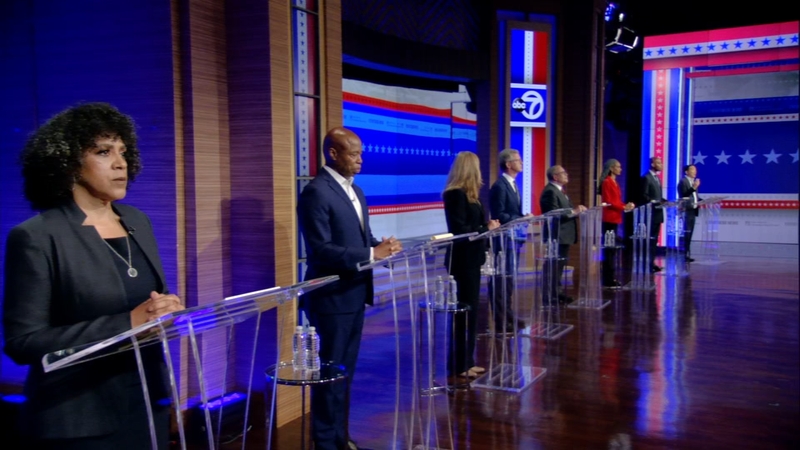 Mayoral candidates back on the trail after tense, fiery WABC debate

NEW YORK CITY (WABC) -- The Democratic candidates in the race to be New York City's next mayor fanned out across the Big Apple Thursday, trying to win over voters one day after sparks flew during the first in-person debate, hosted by WABC.

Primary day is less than three weeks away, and the gloves are coming off as the race heats up.
EMBED More News Videos

The Democratic candidates in the race to be New York City's next mayor are fanning out across the Big Apple Thursday, trying to win over voters one day after sparks flew during the first in-person debate, hosted by WABC.

Former Sanitation Commissioner Kathryn Garcia started the morning at Brownstone Bagel and Bread Company in Park Slope, hours after going round and round with her fellow candidates.

"I think that I was successful in speaking to the voters, which is what I needed to do," she said. "A tit for tat isn't helpful to voters to make a decision."

WATCH THE FULL DEBATE: You can watch both hours of the debate here and on our connected TV ap for Fire, Roku, Apple and Android TV

"The debate was the opportunity for New Yorkers to see what courage looks like in the face of a crisis and exactly why I'm the progressive that is going to win this race," she said. "If I hear a candidate say something about what they've done, and I know there is a fact missing from that, I'm going to share it with voters."

WABC-TV hosted the first in-person Democratic debate in the race for New York City mayor Wednesday night, and there was simmering tensions among the primary mayoral candidates.

Former presidential candidate Andrew Yang visited the YMCA in Park Slope, where Mayor Bill de Blasio is a member, but protesters forced him to move the event.

Ray McGuire, a former CitiGroup executive, spent the morning on Staten Island at an Islamic cultural center and a town hall, along with a meeting with Eric Garner's mother, who has endorsed him.

"We are quite inspired by the response we've gotten from New Yorkers, which is why we've continued with such enthusiasm and such conviction," he said. "We've got one shot to transform this, and it's clear that all those who've been in office have failed."

"I've been doing this for 30 years," he said. "They're coming hard and we've got to back them down."

De Blasio blasted the debate, saying the eight Democrats vying to replace him are not taking the task seriously.

"I heard a lot of statements that reflected a lack of information about city government and how the city of New York actually works," he said. "That was no inspiring to me."

And the feeling appears to be mutual. At the debate, only Yang raised his hand when asked who would accept a possible endorsement from the current mayor.

He said he didn't learn much from the debate and took direct aim at statements made by Yang and former HUD Secretary Shaun Donovan as being inaccurate, saying the candidates should better understand city policy.

He also criticized them for proposing things he says his administration is already doing, and he called on them to provide voters with more specifics.

"This is serious stuff, that's why I was not impressed last night by the totality of what I saw from all the candidates," he said. "The vast majority of New Yorkers are going to make up their decision in the last few days. If I want to say anything about any of the candidates, I will come to that decision at the right moment."