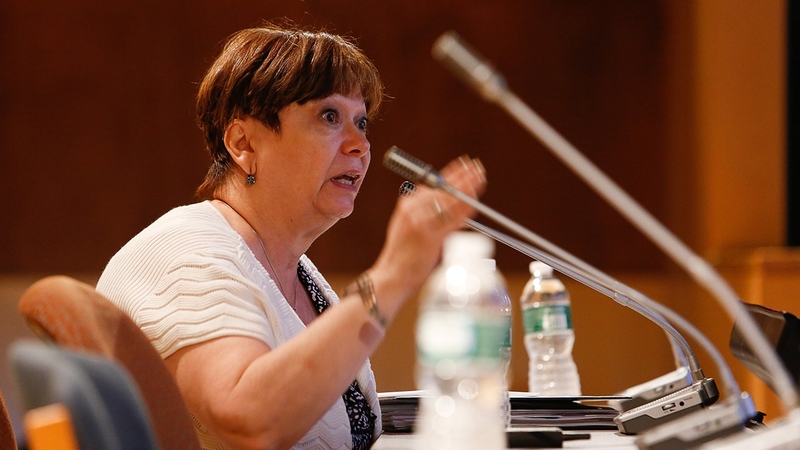 NEW YORK (WABC) -- Embattled Commissioner Gladys Carrion is stepping down from the Administration of Children's Services in New York City in the wake of the deaths of 6-year-old Zymere Perkins in September and 3-year-old Jaden Jordan earlier this month.

In October, Carrion broke down in tears while testifying before New York City Council on child abuse cases.

Zymere died Sept. 26 after what prosecutors say was months of abuse by his mother and her boyfriend in their Harlem apartment. Both have been arrested on charges of endangering the welfare of a child.

In the days following his death, five ACS staffers who directly worked on the case were put on desk duty.

Mayor Bill de Blasio also announced reforms after Perkins' death, but then last week another child died at the hands of abuse.

Three-year-old Jaden Jordan died after he was brutally beaten at his Brooklyn home. ACS workers received a tip about the abuse but were directed to the wrong house.

Jordan was allegedly assaulted by 24-year-old Salvatore Lucchesse, the boyfriend of Jordan's mother, at their home in Gravesend, Brooklyn.

Lucchesse allegedly told police the child fell in the bathtub, but investigators say the boy was so badly beaten that he suffered a lacerated liver and lost a large amount of oxygen.

With pressure mounting, Carrion decided on Monday to exit as ACS commissioner. In her resignation letter to Mayor de Blasio, Carrion said she made the decision after much thought and deliberation.

"I have struggled with this decision but have come to the conclusion that it is best for my well-being. After 40 years of working on behalf of children and families, it is time for me to retire," she wrote.

Mayor de Blasio, while calling for ACS investigations, has defended Carrion in the past, calling her "the person who can actually get the job done."

In a statement announcing her resignation on Monday, he said Carrion's "leadership and reforms have ushered in a heightened level of accountability and performance" at ACS. He appointed her to the position three years ago.