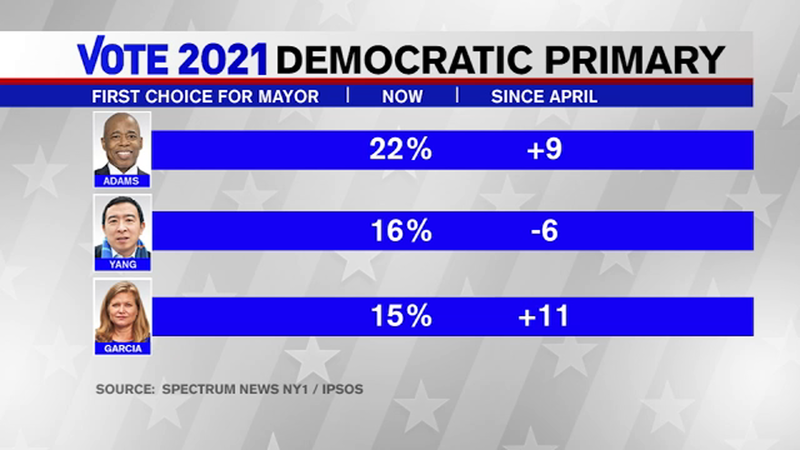 NEW YORK (WABC) -- With less than a week to go until early voting starts for NYC mayor, the endorsement race has hit high gear.

Queens is reeling from a blood-soaked weekend that ended in the death of a 10-year-old boy.

"This is not the city we will go back to, my son won't grow up in a city that I grew up in, filled with crack and grime and dirt and grime and uncertainty," Adams said.

In fact, with public safety leaping to the front burner for many New Yorkers, Adams, an ex-cop, has jumped to the top of the primary pack.

He is followed by a statistical tie between Kathryn Garcia, who has surged after an endorsement by the New York Times, and Andrew Yang, who has lost a lot of ground, but just rolled out his own endorsement Monday - progressive Congressman Ritchie Torres.

All three front-runners have similar positions when it comes to police.

"The vast majority of the New Yorkers I speak to, you know, are concerned about public safety. I don't believe that defunding the police is the right approach," Yang said.

In the middle of the pack sits the more progressive candidates who advocate for defunding the police.

Maya Wiley sits at 9%, but she's hoping to dance to City Hall on the prized endorsement this weekend of Congresswoman Alexandria Ocasio-Cortez.

Wiley is also talking public safety a lot these days, but in vastly different terms.

"I will shift a billion dollars from the New York City Police Department, because we will not have to call police anymore, we will have the people we need to call for the problems we have that do not require a police officer to solve," Wiley said. "And that's just being smart to keep us safe."

But the defund issue has become the defining debate in this race as crime continues to rise and time is running out.

Also, it suggests nearly 1 in 5 likely Democratic voters are still undecided with early voting starting in less than a week.