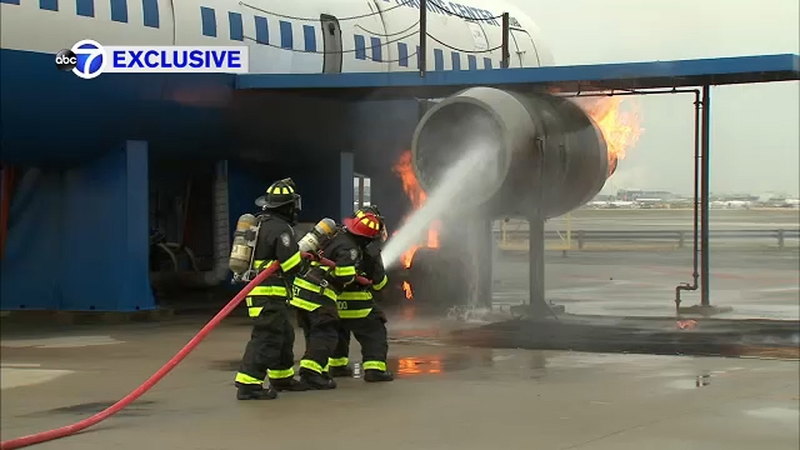 NEW YORK (WABC) -- It is firefighting taken to a whole different level - a simulated plane crash, and burning jet fuel.

"Creating the types of fire you would see, which are big. There is lots of flame, there is lots of smoke. There are lots of different environments we put you through," says Fire Chief Thomas Wieczerzak.

During important training sessions, like one that Eyewitness News has exclusive access to, firefighters with the Port Authority's Aircraft Rescue Firefighting Unit gain valuable experience in all types of dangerous situations.

The fire pit simulator is fueled by propane and can generate a large fire area. Then attacking the burning plane simulator, they utilize a state-of-the-art aircraft rescue firefighting vehicle known as 'striker.' It carries 3,000 gallons of water, 420 gallons of foam and dry chemicals.

There are 300 firefighters in the unit stationed at the four area airports. They first became police officers, then they are trained in firefighting, making a five-year commitment to the unit.

"Still having the ability to be a police officer and do firefighting as well - it's been a dream come true for me," says Crew Chief, Sgt. Brendan Curley.

On the edge of JFK Airport with the world's largest planes landing around them, the unit trains throughout the year at the fire academy.

Two large nozzles are used to attack an engine fire, then the wheels catch fire with sound effects of the tires blowing.

In some simulations, they attack the fire on the ground. On a 757 simulator, they can create fires on the flight deck - interior fires and cargo fires.

"The cycle of making sure that people are proficient, maintaining the current training is important to maintaining the safety of the traveling public," added Fire Chief Wieczerzak.

They are prepared in the event they are needed.