Dozens of Portuguese Man of Wars washing up on Jersey Shore 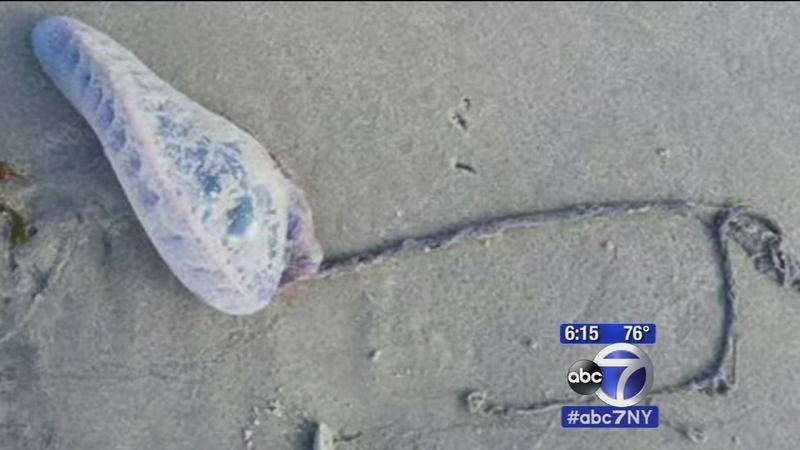 SURF CITY, N.J. (WABC) -- It was a great beach day in Surf City, and there was not one sighting of theses unwelcome visitors, Portuguese Man of War, about two dozen washed ashore over the weekend.

"These Man of War actually travel with the wind and the currents and the tides, so they kind of drift wherever the wind takes them," Yvette Garner, a Sr. Lifeguard-Marine Biologist.

The lifeguards believe they traveled up with warmer waters from the gulf, and then were pushed closer to shore. Strange looking things, they look like inflated clear plastic bags above the water.

"So if you see that, it could be tentacles extending 20, 30, 40 feet out from that which have a very bad sting, worse than a normal jellyfish," said Mark DiLeo, the Lifeguard Captain.

Not killers like their box-shaped cousins, but their stings really hurt. The experts say even washed up on sand, they can still harm you.

"Because even though they look dead, their tentacles have barbs, if you touch it, they send barbs into your skin," DiLeo said.

Lifeguards are on the lookout, because a quick change in wind direction could bring more of them in. Watchful moms tell us they plan to keep an eye out too.

"Just a little more careful, but it won't keep us from coming to the beach," said Janine Fitzpatrick, a beachgoer.

"We're watching them, but you can't just be afraid," said Gerri Cataffo, a beachgoer.

"I haven't seen any, but we keep an eye on the kids, but you have to live your life and have fun. It's summer," said Carrie Gunning, a beachgoer.

"This is a rare occurrence. I wouldn't let it keep people out of the water. Keep your eyes open, swim near a lifeguard," Garner said.