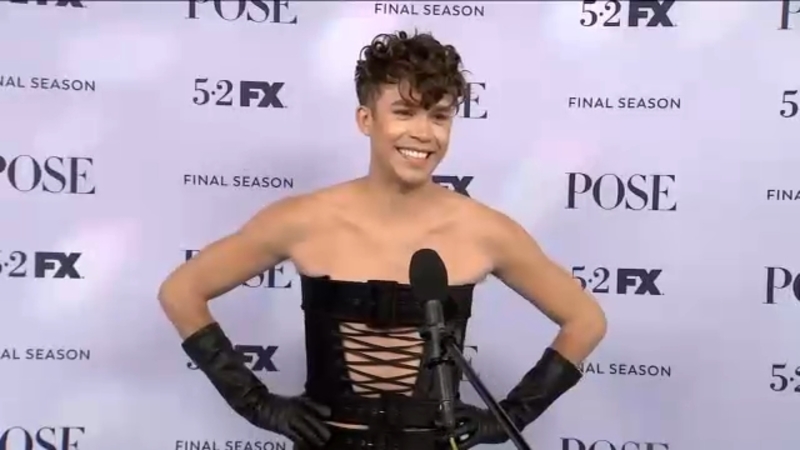 UPPER WEST SIDE, New York City (WABC) -- A star-studded premiere in Manhattan Thursday night was the first red carpet event in the city since the coronavirus pandemic hit.

A socially-distanced premiere for the final season of the ground-breaking series "Pose" was held at Jazz at Lincoln Center in the Time Warner Building in Columbus Circle.

The show's stars, including lead actor Billy Porter, were in attendance.

"I hope it empowers the generation behind us to know and understand that they are enough just as they are," Porter said.

Nominees Leslie Odom Jr., Carey Mulligan and Andra Day were all decked out in gold from head to toe.

The third and final season of "Pose" began shooting in New York City just as the pandemic was shutting down almost every business, but the cast and crew kept on shooting. So it was only appropriate that the first premiere since the pandemic be the one for this landmark TV series.

"It's great," Porter said "It's like I'm breathing again."

Their joy was matched by their optimism.

"We haven't done this in so long, so it feels like home," actress Hailie Sahar said. "It feels like life is getting back to some normalcy, and I love that."

The cast took a moment to reflect on the legacy of the show.

"My word of the day is 'resilience,' and it shows that women like myself can actually be mothers and that we can raise resilient children," actress MJ Rodriguez said. "And that we are not 'other than,' we are simply who we are."

Evidence of the precautions was everywhere, and for those used to being packed in too close to colleagues, it came as a relief.

"It's much more controlled and wonderful because you can focus and think," actress Sandra Bernhard said. "Instead of everybody seeing your friends and screaming and yelling."

The circumstances are appropriate for a series that had to be shot during the pandemic.

"It was difficult, but the thing that was brilliant about it is we did it, and it took longer and it was much more expensive, but we did the right precautions," co-creator Ryan Murphy said. "We follow the right guidelines, and everybody was safe."

Pose is a drama about New York City's African-American and Latino LGBTQ and gender-nonconforming drag ball culture scene in the 1980s and, in the second season, early 1990s.

Featured characters are dancers and models who compete for trophies and recognition in this underground culture, and who support one another in a network of chosen families known as houses.

In 2019, Porter won the Primetime Emmy award for Outstanding Lead Actor in a Drama Series, the first openly gay Black man to be nominated for and win in an Emmy lead acting category.

The series was also nominated for Outstanding Drama Series.

The third and final season of the critically-acclaimed series premieres Sunday night at 10 p.m. on FX, owned by the same parent company as this ABC station.