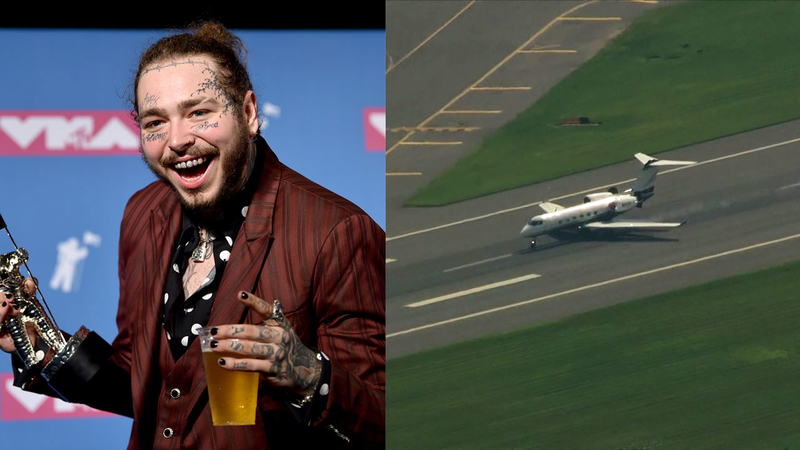 TETERBORO, New Jersey (WABC) -- Rapper Post Malone told TMZ he needed a beer and wine -- mixed together -- after an aircraft with blown tires carrying him and 15 other needed to make an emergency landing Tuesday.

The rapper's private jet, a Gulfstream IV, blew its two front tires shortly after takeoff at Teterboro Airport in New Jersey around 10:50 a.m.

The jet initially tried returning to Teterboro, but it was diverted to Westfield-Barnes Regional Airport in Massachusetts in order to burn fuel, a practice used to decrease the risk of explosion and fire during emergency landings.

After five hours airborne, the aircraft made an emergency landing at Stewart International Airport in Orange County, New York, around 4:00 p.m. Fans of the rapper drove to the airport to watch the landing, and he thanked them on Twitter for their support.

"i landed guys. thank you for your prayers. can't believe how many people wished death on me on this website. f*** you. but not today," the tweet read.

The plane supposed to take Malone to London Luton Airport in the United Kingdom for the Reading and Leeds Festival. The 23-year-old rapper was in the New York City area for Monday's MTV Video Music Awards, where he took home song of the year.