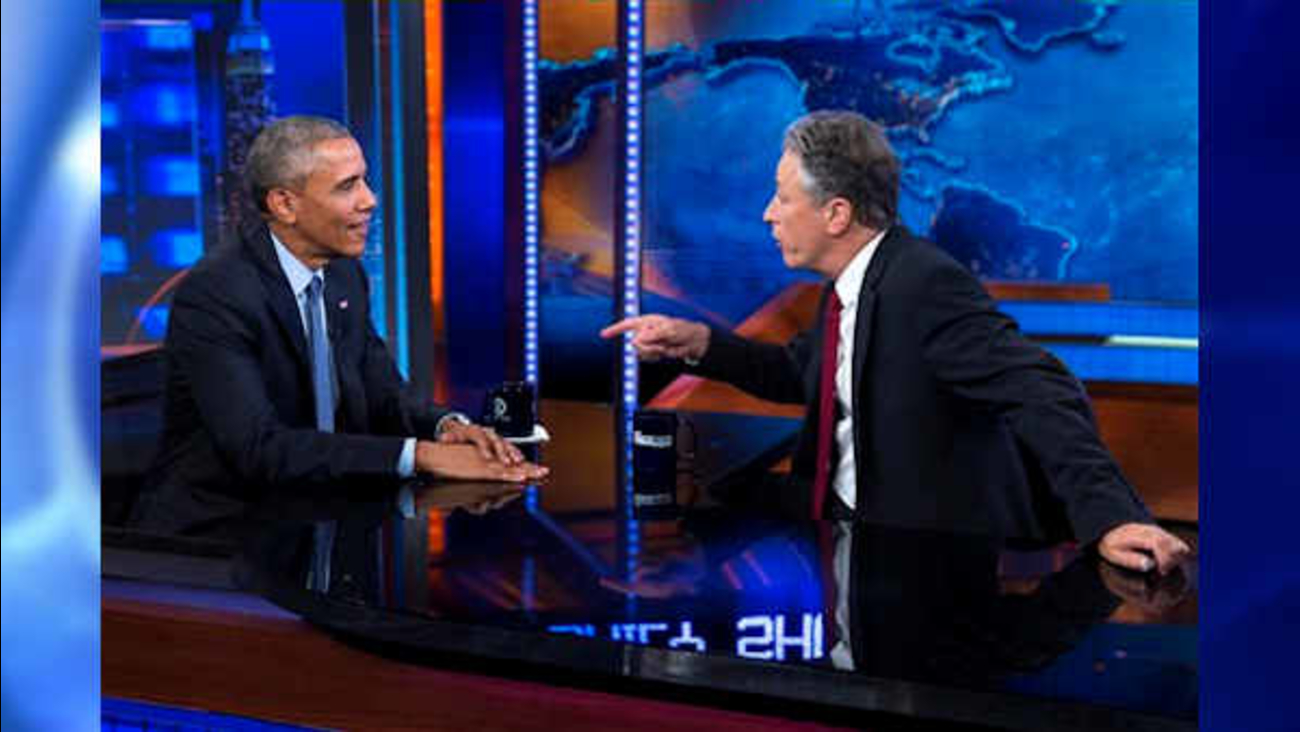 NEW YORK -- President Barack Obama returned to New York Tuesday for an afternoon taping of one of the final episodes of "The Daily Show with Jon Stewart."

For Obama, six-and-a-half years in the Oval Office seems like an eternity. Comedian Jon Stewart has been keeping his anchor seat warm on "The Daily Show" for 16. On Tuesday, the two shared a moment of senioritis as both approach a common phenomenon: the light at the end of the tunnel.

As Stewart prepares for his final episode on Aug. 6, he got one final opportunity to quiz the president and poke a little fun at his expense. For Obama, too, it's the end of an era: he's appeared on the hit Comedy Central show seven times, including three as president.

But in the interview, airing Tuesday night, Stewart put the spotlight on Obama's tenure and the long list of problems that remain: unfinished business in the Middle East, for example, or shortcomings at the Department of Veterans Affairs.

"You really do only have a year left!" quipped Stewart, after a particularly candid answer from the president.

Yet he conceded that many of his goals will go unmet when he leaves office in 2017.

"You're always going to fall short, because if you're hitting your marks, that means you didn't set them high enough," Obama said. "We don't score a touchdown every time, but we move the ball forward."

If that kinetic analogy sounds familiar, that's because it is. At a news conference last year in the Philippines, Obama described his approach to global issues as a pursuit of incremental progress. "You hit singles, you hit doubles; every once in a while we may be able to hit a home run," Obama said in what's since been dubbed the "Obama doctrine."

It was a reflective Obama, more than a comedic one, that showed up at "The Daily Show" studios in New York City on Tuesday. He recalled the sky-high expectations that awaited him when he was elected after a campaign in which his face was etched across the country on posters bearing the word "Hope."

"You made the posters," Stewart interjected.

On Iran, too, Obama portrayed the controversial deal as the best compromise that government could achieve. In a jab at the George W. Bush administration, he joked that his critics think if only former Vice President Dick Cheney had been on the U.S. negotiating team, "then everything would be fine."

But while Obama was focused on the three-quarters of the loaf he was able to get, he acknowledged it was the job of Stewart and the media to measure the part of the loaf he couldn't.

"You're going to really go with this whole sandwich analogy?" asked an amused Stewart.

As his final appearance came to a close, Obama offered a brief observation about Donald Trump, who is drawing GOP outrage with a string of controversial comments and insults about his 2016 competitors.

"I'm sure the Republicans are enjoying Mr. Trump's current dominance as the front-runner," Obama said wryly.

Added Stewart: "Anything that makes them look less crazy."