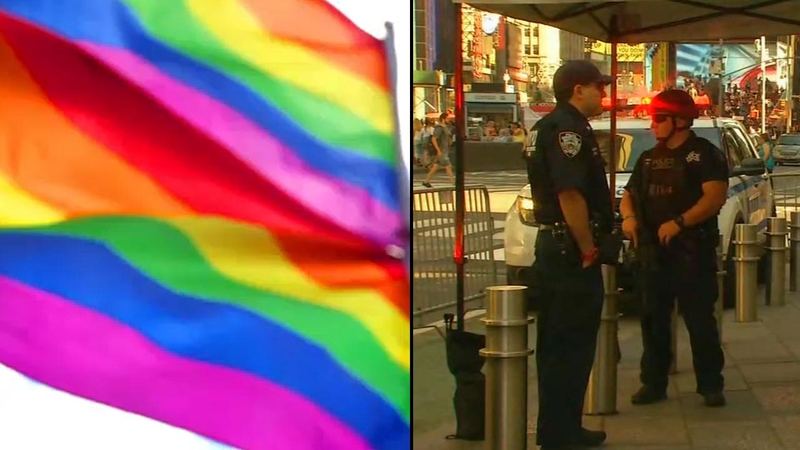 NEW YORK CITY (WABC) -- Route changes and a comprehensive security plan for the Pride March on June 30 have been announced by the NYPD and New York City Heritage of Pride March organizers, along with mass transit information.

The 50th annual Heritage of Pride March is coinciding with the Stonewall 50 Rally and WorldPride, an international event which celebrates the LGBTQ community through parades, festivals, and other cultural activities. An additional three to four million people are expected in New York City from June 22 through July 6 to attend this historic convergence of events.

"The LGBTQ community is an essential part of New York City," NYPD Commissioner James P. O'Neill said. "And during 2019 Pride Month, it is the NYPD's mission - as it is for every large event held in our great city throughout the year - to ensure that everyone can enjoy the festivities safely, free from violence and intolerance."

The MTA will be increasing subway service this weekend and is encouraging the World Pride attendees to take mass transit during Sunday's large scale street closures.

This year's march proceeds through Midtown and the West Village, passing by the historic Stonewall Inn. The march will step-off at 25th Street and 5th Avenue, travel southbound on 5th Avenue to West 8th Street, west on 8th Street to Greenwich Avenue, west on Greenwich Avenue to Christopher Street, west on Christopher Street to 7th Avenue, and then northbound through the dispersal point at 23rd Street.

There will be no cross town traffic along the route during the march. Larger viewing areas as well as an Americans with Disabilities Act viewing area will be provided.

A comprehensive security plan is in place to ensure the safety of everyone participating in or attending the march. Thousands of uniformed and plainclothes officers will be deployed along the entire parade route as well as more than 100 blocker cars and sand trucks in place along the route.

As in years past, the NYPD will deploy officers to ensure a safe and enjoyable event. The NYPD encourages anyone who may see something that appears to be suspicious to find a police officer, call 911, or call the terrorism tip line at 1-888-NYC-SAFE.

The MTA will be running regular L service this weekend for Pride events and will be increasing other subway services.

"The projected attendance has been increased," Transit President Andy Byford said, vowing "to do our bit. We want to put on a good show for New York."

Byford noted that L train repairs are ahead of schedule, so the MTA can afford taking a weekend off from the project. L train riders should have just four minute waits between trains, instead of the 20 minute waits during weekend construction.

Byford said keeping buses moving will also be a top priority, as the NYPD expects to close large chunks of streets for much of Sunday.

"On the buses, we will be making sure with police that we can get our buses through crowded streets," he said. "We are paying particular attention to 14th Street. There will be a detour by Houston Street. We are working with the NYPD and DOT to keep the buses moving. Our message to commuters is please use transit, it's the best way to go."