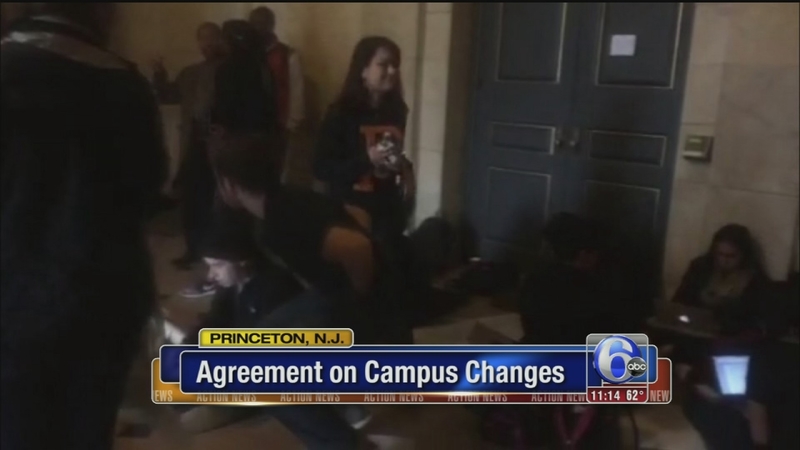 Students remained camped out in the lobby of Nassau Hall earlier in the day, demanding the administration make changes at the Ivy League School.

"At this moment we are choosing to remain in Nassau Hall until all three of our demands are met in full," protester Trust Kuputika said.

Among the demands: acknowledging the racist legacy of former university president and U.S. President Woodrow Wilson and the removal of his name from campus buildings.

The protesters also demanded a space on campus just for black students and cultural competency training for faculty and staff.

"Some people have told me that professors have said the N-word in class. We believe that cultural competency training is important so that professors know what is appropriate and what's not," protester Terrence Fraser said.

The sit-in began Wednesday inside the offices of University President Christopher Eishruber who, after meeting with students for an hour, said he would not sign off on the demands.

About a dozen slept in the office overnight while others camped outside.

"There have been definitely many instances where I've questioned my presence here, where I've felt uncomfortable in my black identity. We are tackling this huge name Woodrow Wilson, but it's about a lot more," protester Adetobi Moses said.

Protesters were told they could face disciplinary action, but they didn't budge until an agreement was reached.

Administrators have also agreed to set aside space on campus for black students, and to implement cultural competency training for faculty and staff.

The agreement in full reads as follows:

This meeting was attended by the Black Justice League (BJL) and President Eisgruber, Vice President (VP) Calhoun and Dean Dolan. By signing below, I agree to have verbalized the following during the Thursday afternoon meeting with the BJL:

On the first demand concerning the legacy of Woodrow Wilson on this campus:

Immediately designate four rooms in the Carl A. Fields Center that will be used by Cultural Affinity Groups. This promise was verbalized by VP Calhoun.
BJL members will be involved in a working group with the staff of the Residential Colleges to begin discussions on the viability of the formation of Affinity Housing for those interested in black culture. This promise was verbalized by Dean Dolan.
On the third demand concerning the implementation of Cultural Competency Training and a Diversity Requirement: