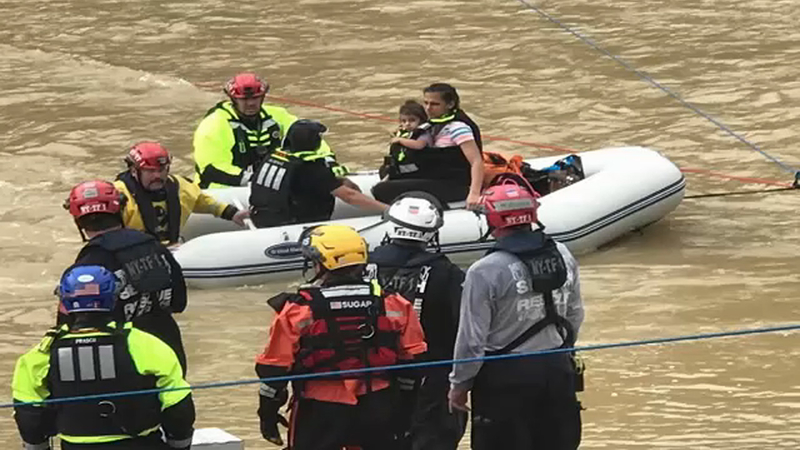 NEW YORK CITY (WABC) -- This Sunday, as more than a million spectators turn out for the annual National Puerto Rican Day Parade, the celebration of culture and history will take on profound meaning in the wake of back to back hurricanes that hit the island.

Organizers are paying tribute to the heroes who came to the aid of Puerto Ricans, including 27 from a special team made up of NYPD, FDNY and other New York City agencies who answered that call.

This year Channel 7 is giving you more ways than ever to experience the National Puerto Rican Day Parade, with our first-ever interactive, multi-stream experience here on abc7NY. We will have a Spanish language version of the broadcast that you can access on the live stream or with the SAP function on your television. We will also provide a live stream on our YouTube channel, youtube.com/abc7NY.

On September 20, Hurricane Maria hit Puerto Rico with a force never felt before. It left behind the worst national disaster in the island's history, with 175 mph winds carving a merciless path of destruction and leaving more than 3 million people without electricity and surrounded by flooded streets and dangerous mud slides.

Many were desperate for shelter and basic necessities, especially as power outages lasted into the weeks and months.

Jose Ortero was on the island when the hurricane hit. He had been pre-deployed with his team from New York Task Force One to help in the aftermath of the hurricane. But little prepared him for what he saw.

"Just watching the devastation, the cars looked like Matchbox cars," he said. "They just rolled down the street. The trees were just taken apart."

Ortero and the 26 other members of his team quickly mobilized into action. In the town of Utuado, they found people isolated from rescue crews and supplies after a bridge access was destroyed.

So the team set up a ferry-line rope rescue system to distribute relief supplies and rescue those in need.

"They had no food, essentially no water," said Dario Gonzalez, of NY Task Force 1. "And they had no medicines."

But despite the threat of their own member being washed away in the rushing waters, they conducted water rescue after water rescue, getting people to much needed shelter.

For those who stayed in the town, cut off from critical supplies, the NY task force was there for them too.

"When you were able to see the impact we could have in helping those people, the guys just wanted to do more," responder Michael McGuinness said.

Channel 7 is your home for the 61st annual National Puerto Rican Day Parade. You can watch on WABC-TV or at abc7NY online or on the news app. We'll have multiple live streams both in English and Spanish.