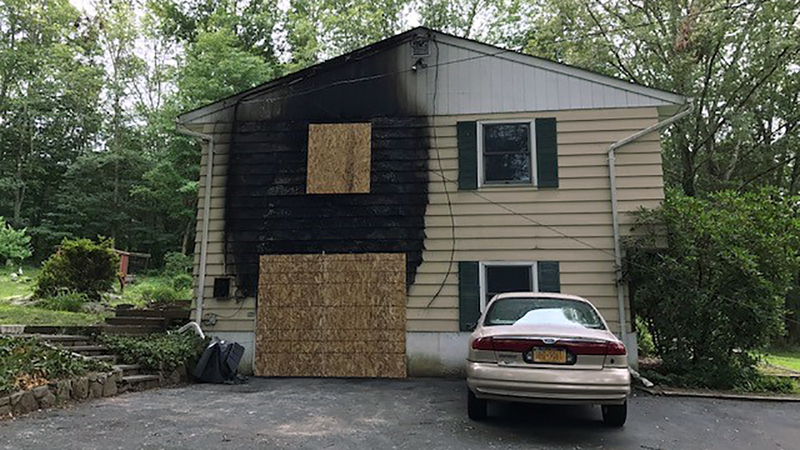 PUTNAM VALLEY, New York (WABC) -- A man out for a drive in Putnam County is being praised as a hero after he helped save an entire family from a fire.

Michael Cola spotted a garage engulfed in flames on Oscawana Lake Road in Putnam Valley and immediately jumped into action, and his quick thinking and calls to the people inside helped a mother and her six children escape.

The charred remains of the now boarded-up garage and the scorched siding show how quickly the flames ravaged out of control. That mother and her kids were able to safely get out just in the nick of time.

"I just stopped the car, got out and ran up the driveway," he said. "And I'm yelling, 'You're house is on fire.'"
EMBED More News Videos

Video reveals the chaos and urgency when a good samaritan stumbles upon a fire.

He had no idea Tiffany Wacaser and her kids were just a few feet away from the racing flames.

"He did stop and ran up, and he was trying to help," Wacaser said. "And after I ran to get my children, I don't know what he did. At the end, we were all out here, keeping away."

Neighbors said they heard several explosions as the blaze began to creep into other parts of the home.

"I was just finishing up the dishes when I heard a boom," neighbor Evelyn Gulley said. "And then again, boom, and I thought, oh my God, was there an accident?"

Cola said he would do it all again if he had the chance.

"It really happened so fast," Cola said. "I'm on the phone with 911, the mom was a trooper, keeping everyone wrangled. We got everyone off to the side of the garage."

The Putnam Valley Volunteer Fire Department quickly contained the blaze, while neighbors offered shelter and clothing to the Wacaser family, who has been overwhelmed with support.

"At least 10 people asked if we would stay with them, which was extremely generous," Wacaser said. "And I was very touched by the way that the community responded."