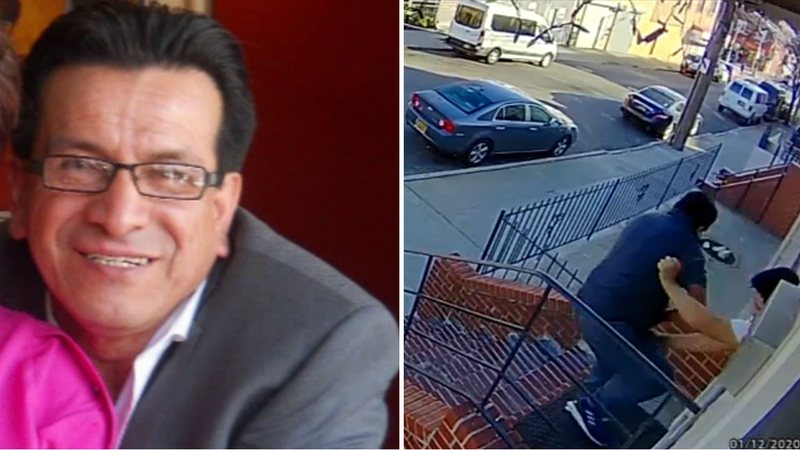 CORONA, Queens (WABC) -- Alex Garces is facing manslaughter charges, accused of pushing his 71-year-old landlord down a flight of stairs and to his death in Queens.

He did not enter a plea at a court appearance on Tuesday. He was ordered held on $25,000 cash bail.

The incident was reported Sunday in the 3200 block of 102nd Street just after 2 p.m.

Police say the 71-year-old victim, Edgar Moncayo, was found at the bottom of a staircase, unconscious and bleeding from the head.

"The guy pushed my dad so furiously that my dad flew from front door to the concrete of the sidewalk," Moncayo's daughter Cristina Moncayo said.

He was taken to Elmhurst Hospital in critical condition and was later pronounced dead.

During the course of their investigation, police say they reviewed video that showed the victim was pushed down the stairs.
EMBED More News Videos

A man is under arrest after his 71-year-old landlord was fatally pushed down a flight of stairs in Queens.

Officials said Monday that 22-year-old Alex Garces has been arrested and charged with manslaughter in connection to the crime.

The victim's family said that Garces had missed paying rent for at least one month, and Moncayo had gone to collect. He had reportedly given his landlord problems and was threatening to leave without paying.

Moncayo's grandson said his grandfather had even reduced the rent from $400 to $200 a month.

Moncayo and his wife lived downstairs and rented out the upstairs. They were described as a gentle couple from Ecuador with three daughters and several grandchildren.

The victim's daughter said her family is donating his organs as he would have wished.