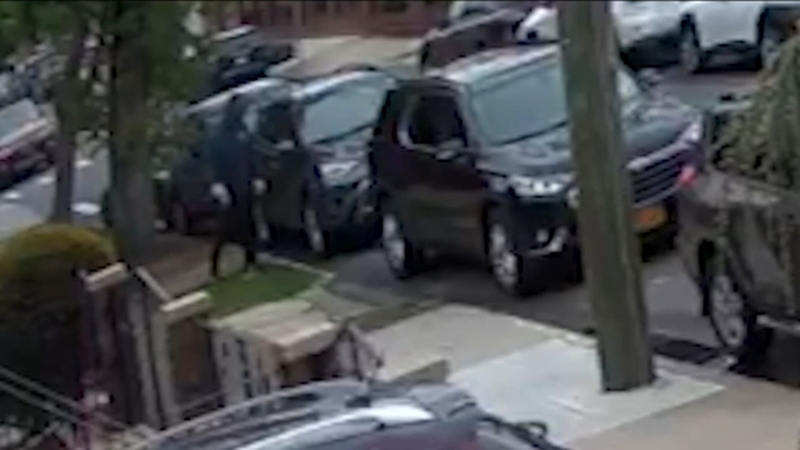 Man arrested after woman shot to death at home in Queens

OZONE PARK, Queens (WABC) -- The mother of an NYPD officer was shot and killed while answering a door at her home in Queens Wednesday afternoon.

Police said 41-year-old Giuseppe Canzani walked up to the 51-year-old victim's home located on 109th Avenue in Ozone Park around 2:30 p.m., knocked on the door and fired three shots, striking the victim twice.

The victim, identified as Anna Torres, was pronounced dead on the scene.

In surveillance video obtained by Eyewitness News, school children can be seen running as the crack of gunfire echoed down 109th Avenue.

Seconds later, a man matching the police description of the shooter, who appeared to be holding a silver gun in his right hand, was captured casually walking from the home at the corner of 96th Street, before getting into the driver's seat of a black Chevy Traverse.

About an hour after the shooting, the suspect drove to the 106th precinct, where he got out of his vehicle and placed a loaded firearm on the sidewalk. Two officers then took him into custody.

Police said the victim is the mother of an NYPD officer, but don't believe the son's affiliation with the department was tied to the shooting.

There were two other family members inside the victim's home at the time of the shooting. Both remained on scene.

The suspect was charged with second degree murder and criminal possession of a firearm.

A neighbor said he was "shocked" by the shooting and never imagined that something like this could happen on his block.

"This is unbelievable," Alam Shofi said. "It's so quiet and so nice. Everyone knows each other. I've been here almost 6 years. Never, nothing happened."

He said he picked up his daughter around 2:30 p.m. and that's when he saw all the police cars.

"It's scary that our family lives here," neighbor Patricia Tominelli said. "Our grandparents live next door you don't know was it a home invasion or not you don't know what it is."

Neighbors said the family kept to themselves and had just moved into the corner house around three years ago.