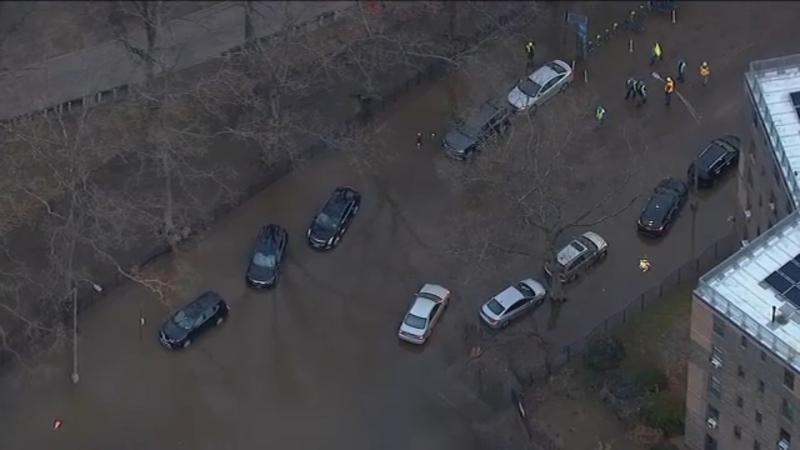 NEW YORK CITY (WABC) -- A massive main break sent water gushing onto a block in Queens early Thursday, damaging cars and flooding the basement of a nearby housing complex.

About two dozen cars were damaged, and one driver who happened to be on the street at the time got stuck in the water and had to be helped by firefighters.

Rashaun Nancys owned one of those damaged cars.

"I couldn't open my car door," he said. "Everything was just flooded."

He said he almost parked his Honda somewhere else Wednesday night to avoid street cleaning.

"I was parked on this side of the street initially," he said. "And I moved my car because that's the Monday-Thursday side, I don't want to get up too too early."

Instead, he put it here where water nearly washed it away -- and ruined three pairs of pricy sneakers worth more than $1,000 that he had just bought to resell.

Two buildings in the nearby Queensbridge Houses were left with water in the basement, and water service had to be shut off for the repairs.

"Apartments still have heat, which is important," City Councilman Jimmy Van Bramer said. "But they do need water."

Lashaun Sugaray Marston's 8- and 4-year-old children didn't have water as they tried to begin remote school.

"I had to stop my work and come from Astoria and come get them," Marston said. "They can't be in their apartment."

Department of Environmental Protection crews responded and shut down the main, and by the afternoon, the hum of generators powering pumps and power washers clearing the mud caked sidewalk joined the howl of a biting winter wind. Add in the hammer of a backhoe's bucket all creating a chorus of cleanup on Vernon Boulevard, adding to a soundtrack of stress left behind.

"Hopefully I can keep the car," Nancys said. "But I don't think so, honestly."

The DEP says repairs have been completed and water service has been restored to all customers.

ALSO READ | NYPD officer stable after being shot in back in Bronx; suspect in custody
EMBED More News Videos

The suspect ran as police pulled over. Officers gave chase, and he turned and fired four times, striking the officer once in the lower back, just below his protective vest.