The heroes behind 'Queeroes': Artists spark curiosity and love for LGBTQ+ community with new mural 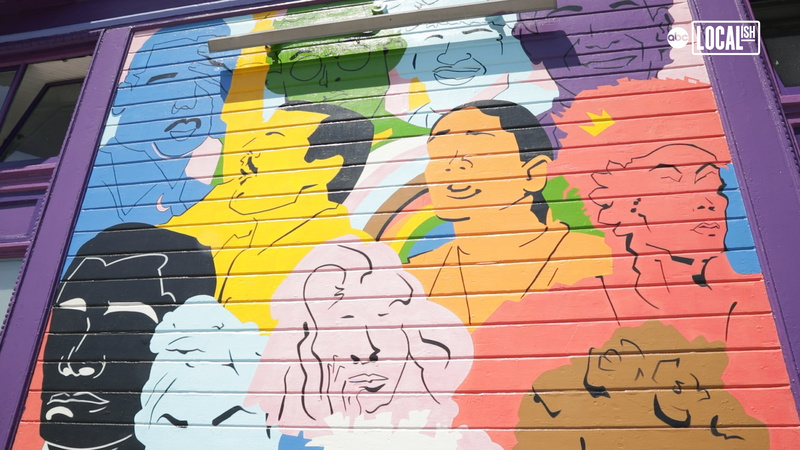 A newly unveiled mural now adorns the center's exterior featuring 12 vibrant likenesses of local and international LGBTQ+ figures. The powerful message and the iconic location are symbols of pride for San Francisco's LGBTQ+ community and for the talented artists who created it.

Latinx and queer artists Juan Manuel Carmona and Simón Malvaez call the piece Queeroes, hoping their tribute to historic and living LGBTQ+ legends will spark curiosity, education, and "mucho amor" for all who stop to admire.

"The mural becomes an activism on its own, and I think that's the power of public art," expressed Carmona.

Queeroes honors local and international heroes to represent the diversity and scope of LGBTQ+ history. The mural also celebrates the intersection between the artists' queer and Latinx identities.

"We wanted to represent Latino heritage, and that's why we put both Frida Kahlo and Chavela Vargas. There's also people who represent the trans community, which are Honey Mahogany, Sylvia Rivera, and Marsha P. Johnson," stated Malvaez. "There's people who are alive and are actually working locally to benefit the city."

"Growing up as a kid in the closet, it was very lonely. So, the center for us represents a sanctuary to be free. I wanted to tell kids nowadays, growing up, that they're not alone," said Carmona. "This mural, to us and specifically to me, represents that there's heroes that you can actually look up and people that you can follow."

The mural's high visibility on one of the busiest intersections in San Francisco was purposeful in Malvaez and Carmona's quest for raising awareness about LGBTQ+ history and current activism.

"Our goal was two things, make curiosity for people to be like, 'Oh, I don't know about this character, who is it? And what has he or she done to the community?' And also represent love," described Malvaez.

Underneath the mural Carmona and Malvaez wrote the words "Con mucho amor," to bolster the mural's message of love and pride.

"Pride goes beyond just celebrating and just partying, and the message is to, you know, get curious about the LGBTQ history, the movement that started in New York and in San Francisco 51 years ago," said Carmona. "We can hold hands now on the streets and not be criminalized, and those are things that people sometimes forget. So, this message is for everybody to see."