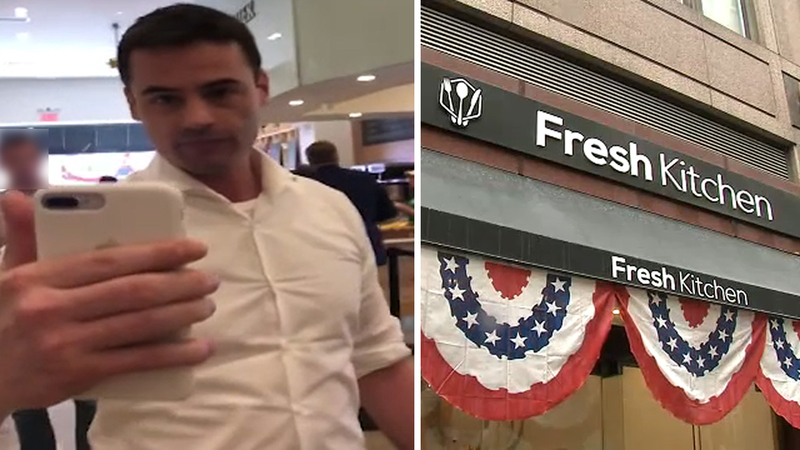 MIDTOWN EAST, Manhattan (WABC) -- A male customer at a Fresh Kitchen in Manhattan was caught on camera delivering a racially-charged tirade over workers speaking Spanish inside the establishment.

The incident happened around noon on Tuesday.

"The clients of your staff are speaking Spanish to customers, when they should be speaking English," the angry customer said. "If they have the balls to come here and live off of my money, I pay for their welfare, I pay for their ability to be here. The least they could do is speak English."

The customer pointed at all the employees he heard speaking Spanish, repeatedly saying "It's America."

Eyewitness News spoke to the 35-year-old customer who captured the rant on her cell phone. She speaks Spanish and works as an office manager, but she did not want to be identified.

She said the angry customer lost it after the person ahead of him started ordering in Spanish.

"I just looked at him and said, 'You're very ignorant,'" she said. "He said, 'I'm highly educated and I doubt you are, and you need to go back to your country.' I said, 'Funny, I am in my country. I was born and raised here in New York.'"

The angry customer, believed to be a lawyer in Manhattan, then questioned the legality of the employees.

"My guess is they're not documented, so my next call is to ICE to have each one kicked out of my country," he said.
EMBED More News Videos

The woman we spoke to said she felt compelled to defend the workers.

"I put my camera down and said, 'You wanna call ICE, call ICE. I'm gonna call the police because now I feel threatened,'" she said. "At that moment, he threw his sandwich. He threw his soda."

The man then walked out.

"At first it was, wow, you're bullying someone that you feel superior to for no reason," the woman said. "After, I kind of got flustered, but I also kind of feel bad for him because it shows that his mental stability isn't all there. He was completely off hinge."

New York City's diversity is our strength. It's what makes this city great. The 8.6 million people who call this city home speak more than 200 languages – they’re all New Yorkers and they’re all welcome here.

After the video was posted online, the lawyer's Facebook page lit up:

"I'm in tears reading these comments," one person wrote. "The internet is going to have a field day. Your law career in New York City is officially over."

Another person wrote, "Wow dude, you're going to have leave town, serves you right."

Another post read: "Way to ruin your business bro', was it worth it? Do you feel big now?".

The lawyer may not like Spanish, but his web site claims he speaks it fluently. It also claims he's a member of the New York State Bar, and if he is, it's news to them. Wednesday night the bar said, "He is not a current member of our voluntary association."

Some New Yorkers have gotten together to hire a mariachi band to go to the lawyer's office on Thursday.