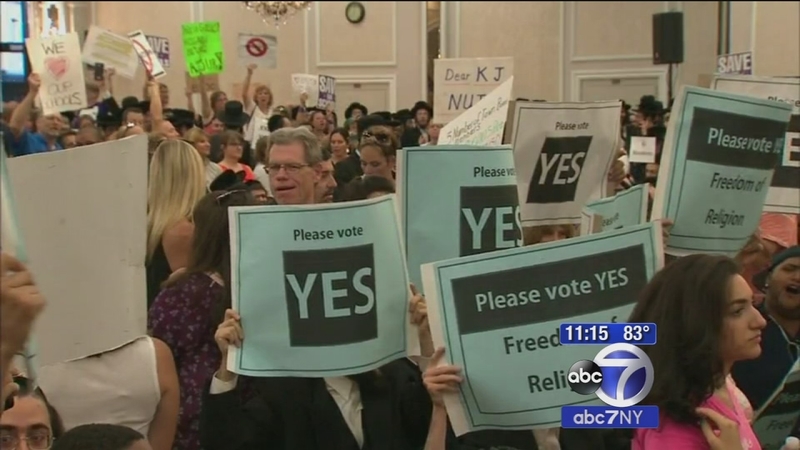 MONROE, N.Y. (WABC) -- During a heated meeting that lasted more than an hour Tuesday night, a town board voted to allow a Hasidic Jewish village in the Hudson Valley to annex approximately 164 acres of its land.

Board members in the Orange County town of Monroe denied a request to allow the village of Kiryas Joel to annex up to 507 acres of town land. Instead, the board allowed the village to annex only 163.8 acres.

Tensions flared during the meeting as hundreds of people were held behind metal barricades in the banquet hall where the vote was held. Police officers yelled "Sit down!" as dozens in the crowd waved signs and shouted at one another. For more than an hour, council members tried to explain their position on the proposals to the crowd as hecklers in the audience shouted at them.

Leaders of the densely settled enclave of ultra-Orthodox Satmar Hasidic Jews have said the village of 22,000 is bursting at the seams and needs more land to accommodate its quickly growing population. Opponents of the annexation request, which was made by out-of-village Satmar, say they fear increased congestion from more apartment buildings in the suburban area.

"For those who live in the 164 (acres), it's a victory. We're saddened for those who didn't make it, but we're optimistic for those who did," he said, noting that residents who lived in other parts of the village likely will continue fighting for annexation.

Those who oppose the measure have vowed to sue to overturn the approval. They argue the village failed to follow state environmental law.

"You give them the 164 acres they'll be back for the 507 because it's inch by inch, and it has nothing to do with religion they keep bringing that up," said Donna McGoldrick, a resident.

"This whole thing only has to do with hate against a group of people and they want to keep them defined in a certain area and not to grow and expand," said Herman Wagschal, a rabbi.

"We might end up with a court case," Councilman Gerard McQuade Jr. said. "The petitioners are likely to sue."

Before the vote, Monroe Town Supervisor Harley Doles said the town was "faced with an enormous decision."

The 1.1-square-mile village of Kiryas Joel was founded within the town of Monroe in the mid-1970s by members of the Satmar sect seeking a more tranquil setting than Brooklyn, about 60 miles south.

"The decision does not surprise me, but it was definitely wrong," Neuhaus said. "There is a significant lack of leadership in the Town of Monroe. This annexation is not in the overall interest of the public. This has been and remains my position. The state failed us by not giving Orange County lead agency status and our state officials made a mistake when they waited until the last minute to introduce legislation to potentially stop the annexation, hurting the chances of advancing a result that could have benefited all of Orange County."

In light of the Town of Monroe's vote, Neuhaus asked the chairman of the Orange County Legislature to convene a special legislative meeting as soon as possible to consider the county's options.

"Time is of the essence," Neuhaus said. "The options we have available to us today will not exist in 30 days. The fact that the Village of Kiryas Joel chose to meet on the Sunday night of Labor Day weekend to approve the annexations gives me no reason to believe the open government and transparent process that state officials claimed would exist, actually do."

Monroe residents are also questioning what the move will mean for the public school system.