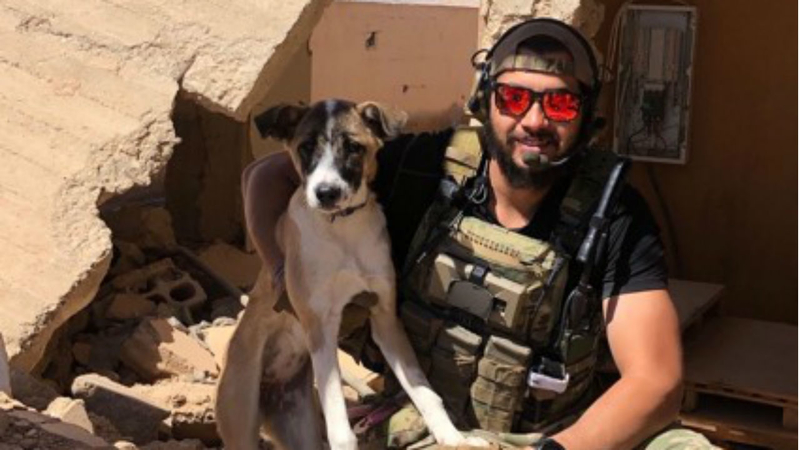 Soldier pleads for help to save dog stuck at JFK Airport

NEW YORK (WABC) -- A veteran who rescued a puppy from overseas is pleading for help after a paperwork mix-up means the dog could be sent back to Jordan where her fate remains unknown.

Harley landed at JFK Airport on Aug. 24 and is considered an emotional support animal to help deal with the effect of war. The 1-year-old dog's entry was denied by authorities at JFK who cited invalid vaccination paperwork when she arrived.

Officials say the invalid paperwork was only the result of a minor mistake which has since been corrected in an appeal by Paws of War, a Long Island-based organization that matches rescue dogs with veterans.

Now the organization working together with local representatives to help bring Harley home.

U.S. Air Force Staff Sgt. A.J. Kirrish first met Harley at the start of 2020 during a deployment to the Middle East.

She was the last pup of her litter to survive so she was brought back to their base where she was nurtured back to health. That is when she became like family to Kirrish.

"Throughout the entire deployment, she would be one thing I'd love to see, come home every day to," he said. "If we were out on mission, I'd come back, and before I could even take my body armor off. She was all over me crying. Trying to hug me just wanted love from me, and it was an amazing feeling."

"If Harley is sent back to Jordan, she will almost certainly will be euthanized. Paws of War is happy to provide any clarifying documentation that the CDC deems necessary. Additionally, they are willing to organize for a veterinarian to administer an additional rabies vaccine in airport quarantine, just to be safe. As Harley was designated to be a companion to an American veteran and given her likely death without your intervention, we ask that you strongly consider making an exception for Harley so that she may continue on to her new home," the representatives wrote in the letter.

Kirrish said it's terrifying to think what would happen if Harley gets sent back to Jordan.

"They are saying that she possibly may have rabies, and that her paperwork isn't lining up," he said. "If the CDC here in the United States doesn't want to deal with her. I can only imagine her fate, when she arrives in a country overseas, with the tag of possible rabies."

Officials with Paws of War have asked the CDC if they can re-vaccinate her and they will even quarantine her too.

Harley is the second dog stuck at JFK. Berrie was on the same flight and is also dealing with invalid paperwork.

Congressman Suozzi is helping transfer Berrie to a veterinarian, which will be after September 25. Once she's released from the veterinarian, she must be handed back to Paws Unite People for a minimum of six months. Then she'll be up for adoption, which there's a wait list for.

An animal rescue on Long Island is fighting to care for an abused dog after it was flown to the U.S. to find a home but its fate is now in limbo due to an issue with its paperwork.