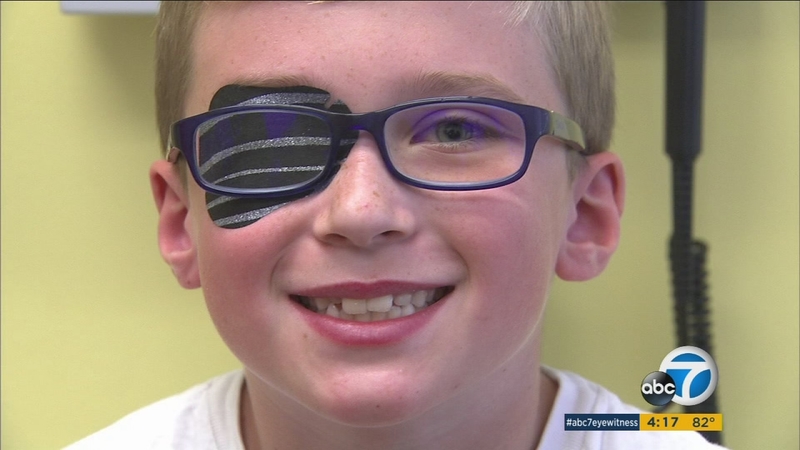 VALENCIA, SANTA CLARITA -- When 8-year-old Josh Murphy was in kindergarten, a vision test revealed his left eye was weaker than his right.

More tests revealed he had amblyopia, or lazy eye, a common cause of visual impairment in children.

"Amblyopia is a condition of childhood where the brain tunes out one eye, sometimes even both eyes, because it's not getting a clear picture from the eye," Dr. Sudha Nallasamy, an ophthalmologist Children's Healthy Hospital Los Angeles, said.

To make the weaker eye stronger, children wear a patch for two or more hours a day. The goal is to retrain the brain to connect with the weaker eye.

"It can be really hard to get a child to cooperate with the patching because they'd have to patch for a long period of time," Nallasamy said.

But now, by using an iPad and special glasses, researchers have tested news way to help, using treatments kids may enjoy.

High contrast images are sent to the weak eye and low contrast ones to the other. This trains the eyes and brain to work together.

In a study published in the Journal of the American Medical Association, 28 children were randomly assigned either to play an iPad game or wear patching.

"We found that the binocular iPad game treatment was really successful at treating the vision loss in the amblyopic children and was more successful than patching at the two-week visit," said researcher Krista Kelly, of the Retina Foundation of the Southwest.

Researchers said the new iPad game is a promising addition to existing treatments for lazy eye. They hope more games, television shows and movies can be used as treatments in the future.

"I wish they had it like a few years ago so I would be able to use it," Murphy said.