No bond for millionaire Durst on New Orleans weapons charges 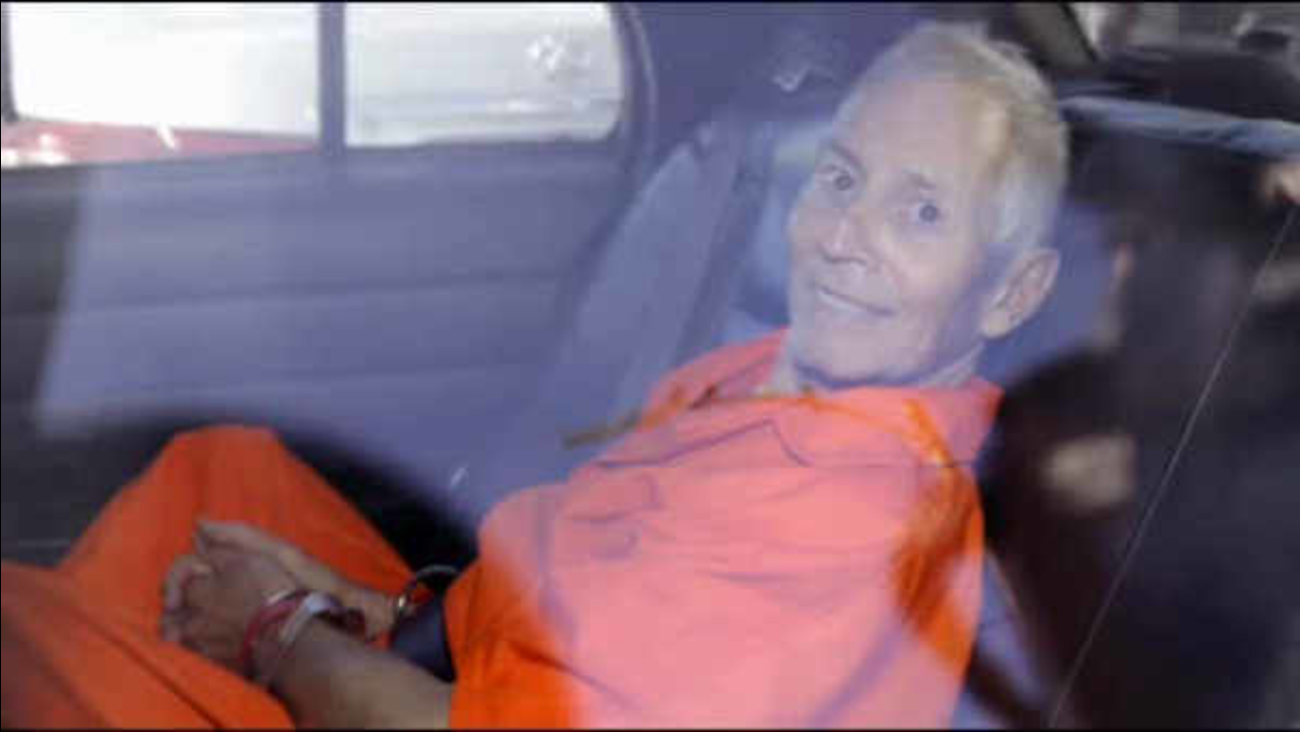 NEW ORLEANS (WABC) -- A magistrate has ordered that millionaire Robert Durst be held without bond on weapons charges in Louisiana.

Magistrate Harry Cantrell said that based on what he heard in Monday's bond hearing and on court documents, the 71-year-old Durst is both a flight risk and a danger to others.

Durst was seated beside his lawyers, his hands shackled to his sides in padded cuffs. He has been in a prison's mental health unit for nearly a week. Officials have called him a suicide risk.

He's accused of killing a female friend in California 15 years ago, but his lawyers say his arrest w

Last Sunday, authorities removed about 60 boxes of material from the home of a friend of Durst's in the Orange County community of Campbell Hall. She was reportedly storing private papers for the 71-year-old including bills, photographs and transcripts of his murder trial in Texas.

Durst was arrested last week on murder charges for the shooting of Susan Berman in 2000. Durst was illegally arrested on charges that he murdered a woman in California, as well as drug and weapons charges filed in New Orleans, attorneys said in court papers Friday.

In the papers filed at the State Criminal District Court in New Orleans, William Gibbens and Dick DeGuerin asked a magistrate judge to schedule a preliminary hearing so that they can prove that there is no probable cause to keep Durst jailed. They say he should be released.

The judge agreed to schedule that hearing during another court appearance by Durst on Monday in New Orleans.

The attorneys also asked the judge to order that evidence be preserved from the hotel where Durst was arrested. They are seeking any and all records related to Durst and Everett Ward, the pseudonym Durst used to check into the hotel.

The documents blasted the arrest, which the attorneys say was orchestrated "to coincide with the final episode of the HBO docudrama 'The Jinx.'" The six-part documentary concluded Sunday.

Durst, a member of a wealthy New York real estate family, was charged with murder in California for the December 2000 shooting death of Berman. Durst's arrest came shortly before the HBO finale about his links to three killings - that of his first wife, who disappeared in New York in 1982; Berman, the daughter a mobster and a close friend who acted as his spokeswoman after his wife disappeared; and a 71-year-old neighbor in Texas whose dismembered body was found floating in Galveston Bay in 2001. Durst has only ever been tried for the Texas killing, and he was acquitted of murder.

Durst waived extradition in New Orleans but is being held there on charges that he was a felon in possession of a gun and with illegally carrying a weapon with a controlled substance. Court documents say investigators found nearly $43,000 in cash, a gun and a rubber mask that could cover his head and neck in his hotel room when he was arrested. Authorities have also said marijuana was found in the room.

However, Durst's attorneys say his previous convictions are not serious enough to merit the gun charge.