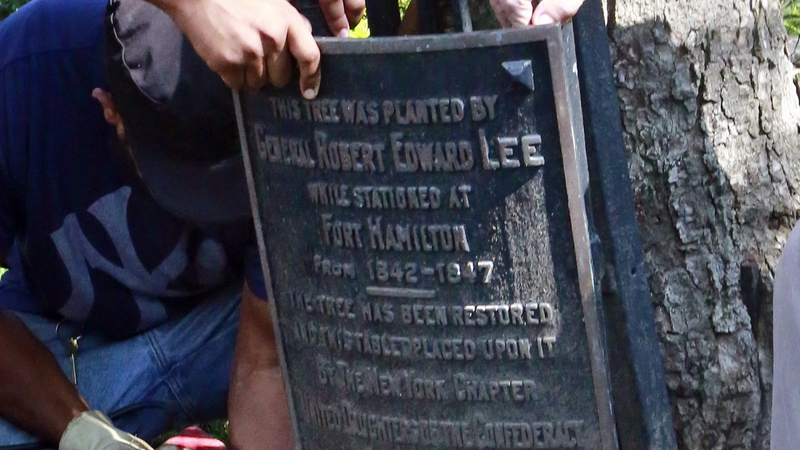 FORT HAMILTON, Brooklyn -- Plaques honoring Gen. Robert E. Lee were removed from a church property in Brooklyn on Wednesday, and the governor called on the Army to remove the names of Lee and another Confederate general from the streets of a nearby fort amid a national debate over whether monuments to Southern Civil War figures should be removed.

"The events of Charlottesville and the tactics of white supremacists are a poison in our national discourse, and every effort must be made to combat them," Cuomo said. "Symbols of slavery and racism have no place in New York."

Lee and Thomas "Stonewall" Jackson both spent time at Fort Hamilton, well before the hostilities of the Civil War. The streets run on the base, and aren't readily accessible by the general public.

Lee's name also was on plaques on the grounds of a nearby church, the now-closed St. John's Episcopal Church. The larger of the two plaques was placed there by the United Daughters of the Confederacy in 1912. It commemorated the spot where Lee is said to have planted a tree while serving in the Army at Fort Hamilton two decades before he became commander of the Confederate Army of Northern Virginia.

The plaque marked a tree that was a descendant of the one Lee is believed to have planted. A second plaque made note of that.

Bishop Lawrence Provenzano of the Episcopal Diocese of Long Island, which owns the property, said no one had really given much thought to the plaques, which were left behind when the church was closed in September 2014. A minister who called Tuesday reminded the diocese and suggested the plaques be removed, given Charlottesville.

"It was very easy for us to say, 'OK, we'll take the plaques down," said Provenzano, who called them "offensive to the community."

He was on-site Wednesday when workers used power tools to remove them. People opposed to the removal were there, including some yelling protesters. The plaques will be kept in the church's archives, but not put on display, Provenzano said.